A Toronto woman whose kidneys are failing has taken her frantic search for a donor to the newspaper classifieds.

“Mother of a 12-year-old daughter desperately looking for a generous O blood type willing to get tested and possibly donate a kidney to save my life,” states the ad Jennen Johnson placed in Now magazine.

She joined The Morning Show on AM640 with guest host Mike Stafford on Tuesday to tell her story.

Like an estimated 1 in 1000 Canadians, Johnson has the autoimmune disorder Lupus, which along with the medication she takes to manage the condition, has caused her kidneys to fail, she said.

“I’ve had Lupus for quite some time, and you know with Lupus, it just completely annihilates your organs,” the 42-year-old said.

On her GoFundMe page, where she’s crowdfunding to pay for the advertising, she said it’s a “constant struggle” to try to maintain a normal life for her 12-year-old daughter while she undergoes dialysis for four hours a day, three times a week.

“It just takes a toll on you,” she said. “In terms of my daughter, she has extracurricular activities that she would like to take part in. Sometimes she doesn’t even get to go because I don’t even make it on time from dialysis.”

“She’s very understanding about the whole process,” she said.

READ MORE: Success of kidney transplant is dependent on age and sex: study

More than 1,000 people in the province are currently on the wait list to receive a kidney transplant, including Johnson, but the process could take years.

Several newspapers refused to run her classified ad at first, but since it’s been published, she said she has received many responses.

“The outpour of people coming out to help has been amazing,”  she said, adding that the process to find out whether they can donate will take months.

Compared to receiving a kidney transplant from a deceased donor, living donations reduce wait times and the outcomes for patients are slightly better, according to the Kidney Foundation of Canada. 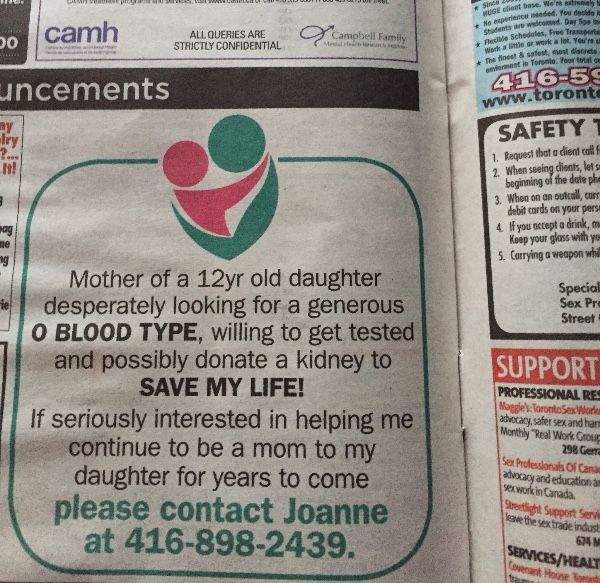