Hateful graffiti has been drawn and painted in areas throughout an off-leash dog park near Ranch Estates Drive in northwest Calgary.

And the markings have been up for several days, neighbours say. 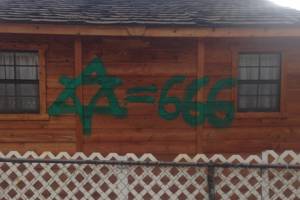 Tinckler spotted the mixture of anti-Islamic and anti-Semitic graffiti about a week ago while walking his dog. He’s lived in Ranch Estates for 20 years and said he’s never seen racist markings in the area.

“It was troubling,” Tinckler said. “I didn’t have a telephone or anything with me to take a photo, so I thought I’d let it go and see if someone reported it.”

A week later, Tinckler was back at the park and the markings were still up, so he reported them to Crime Stoppers.

“I want to see these images taken down and I would really like to not see them again,” he said.

“It’s a very friendly community and to see images like this is very disturbing.”

The Islamic Association of Northwest Calgary (IANWC) is about a five-minute walk away.

IANWC board member Adel Rachdi said he’s not surprised by the markings.

“This happens because people sometimes have misunderstanding about Islam. Ignorance. That’s what it comes from,” Rachdi said.

He said the mosque has been trying to educate people by hosting monthly open houses that the entire community can attend.

“It’s really our duty. We have to do more and more to go to other communities to reach out and to try and educate people about Muslim and Islam.”

Tinckler reported the graffiti to Crime Stoppers and said he’ll call the city on Friday.

There’s no word yet on whether any other neighbours have also reported the graffiti.