A 35-year-old man was killed by an explosion while working in an industrial park on the northwest edge of Red Deer Thursday afternoon.

Blackfalds RCMP said it happened at around 1:40 p.m. at the Burnt Lake Industrial Park at J Moore Enterprises.

A single tanker exploded, RCMP said, destroying the tanker and killing the man.

“At approximately 2 p.m. this afternoon, a worker was checking to determine if a large bulk tanker had been cleaned and apparently, it was at that point, the tanker exploded and the worker was killed,” Andrew Hanon with Alberta Labour said.

Nobody else was injured.

This is the lot for J Moore Enterprises where a 35y/o man was killed in a tanker explosion this afternoon. OHS tape lines the fence #reddeer pic.twitter.com/xRN7LlJp2M

The explosion also caused some damage to surrounding buildings and scattered debris across a one-block radius.

Red Deer RCMP said there was only one explosion, which was felt by people in Red Deer.

Christine Fitzsimons works in an office she estimates is about 100 metres north of the site of the explosion. She told Global News she felt a powerful blast while sitting at her desk.

“And then just this huge boom. I couldn’t even comprehend what had just happened,” Fitzsimons said. “I thought my car exploded outside or something hit our building but at the same time, I saw this red flash and it felt like I’d been slapped.

“The windows of the building shook so hard you could actually see them move.”

Fitzsimons said her building was not evacuated but when asked how she felt about going back to work on Friday, she said it would be on her mind.

“It’s a concern anytime you work in an industrial area, you know, there’s equipment and chemicals around,” she said. “It’s always a concern but it just reminds us to always have a safety plan.”

Red Deer County Fire and Traffic members diverted traffic while the scene was contained and made sure the fire was put out.

Since it involves an inter-provincial transport company, the federal branch of Occupational Health and Safety is investigating.

The man’s family has been notified. RCMP did not release his name.

Red Deer is about 150 kilometres south of Edmonton. 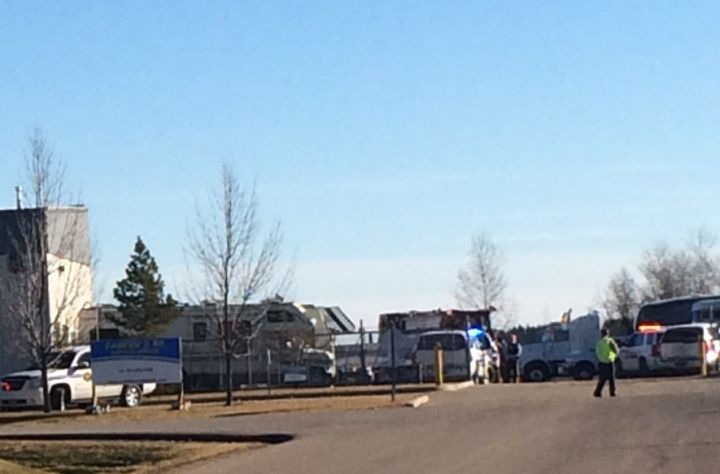