By Staff Global News and The Canadian Press

CLEVELAND – CBSSports.com has given the Toronto Raptors and the city’s mayor, John Tory, more reason to be fired up for the NBA Eastern Conference final.

The website ran an online fan poll asking “Who will win the NBA title?”

The options were: Warriors, Thunder, Cavaliers, Other.

It sparked outrage on social media, as Raptors fans fought back with the hashtag #WetheOther, a take on the Raptors’ “We the North” marketing campaign.

“We’re not the slightest bit offended,” Tory wrote. “In fact, we’re accustomed to being underestimated. Just a few days ago LeBron James said he was looking forward to playing the Heat – a team that is now golfing.”

“Please don’t hesitate to have your people call my office to get prime camera positions for the parade after the Toronto Raptors win the NBA Championship.” 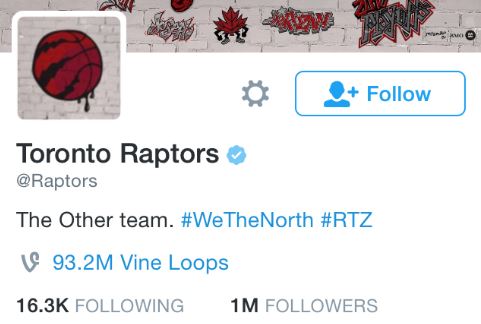 Coors Light Canada and the LCBO also jumped onboard.

Who will be cheering on #WeTheOther tonight? 🏀

The “Other” option, which was eventually changed to “Raptors,” was dominating the poll as of Tuesday afternoon at 95 per cent of 1,765 votes cast.

An explanation was later posted on the CBS Sports NBA Twitter feed.

“We posted it before Game 7! Raptors/Heat wouldn’t fit! We love you, Canada!,” the tweet said.

We posted it before Game 7! Raptors/Heat wouldn’t fit! We love you, Canada! https://t.co/FStrHVn0pU

The Raptors and Cavaliers tip off in Game 1 on Tuesday night in Cleveland.