Intensifying ‘El Nino’ has surprises in store for Canadian weather

WATCH ABOVE: Climate scientists say the phenomenon known as “El Nino” could create big changes in this winter’s weather patterns and it could deliver an unforgettable season ahead. Jackson Proskow reports.

TORONTO – Climate scientists are keeping a close eye on what this year’s El Nino could mean for Canada’s upcoming winter.

Global News Meterologist Anthony Farnell said the phenomenon could bring another warm, dry winter for the Prairies, and Quebec and Ontario may see some relief after last year’s frigid temperatures.

“A lot of people ask ‘how can El Nino, which occurs in the middle of the Pacific, affect the weather in Canada,’” Farnell said.

“That warm water displaces the jet stream that causes basically chaos across much of the globe, and shifts where the desert areas are, it also shifts where the flood zones are which is why we get wacky weather in places that aren’t typically used to it.”

This year’s El Nino is already the second strongest on record for this time of year.

The weather phenomenon is so big that Bill Patzert of the U.S. National Weather service has dubbed it a “Godzilla” event.

READ MORE: ‘Bruce Lee’ El Nino already nearing record levels, could end up as 1 of the most potent ever

The mass of unusually warm water is already so big and warm that last month it appeared bigger than it did back in 1997. 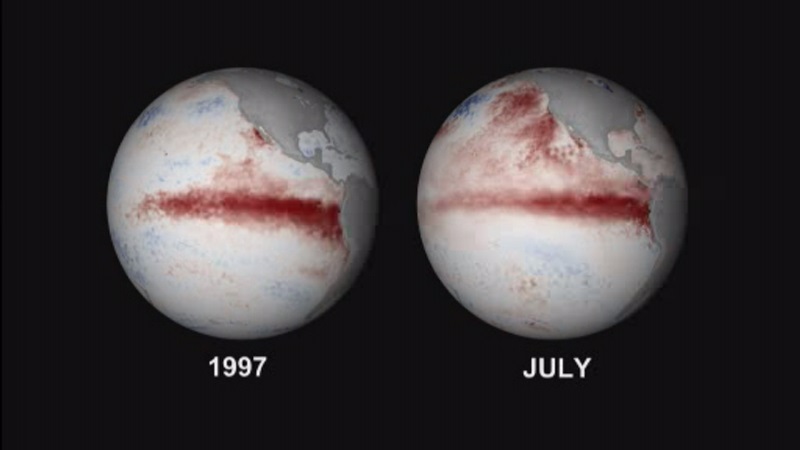 That El Nino was blamed for the ice storm that paralyzed large parts of Quebec and Ontario, and brought a mild winter to the Prairies.

It also caused massive floods in California, where Los Angeles saw a year’s worth of rain in a month, causing billions of dollars in damage.

But that doesn’t necessarily mean the same type of weather will happen again.

“No two El Ninos are ever alike,” Farnell clarified.

“[There are] still a lot of question marks for winter in Canada.”

The warmer than normal waters are being blamed for unusual events in the southern United States and Mexico. Thousands of red crabs have washed ashore farther north than normal, and dozens of starving sea lions have needed rescue as the fish they eat flee to colder water.

With files from Jackson Proskow of Global News.