What does child care actually cost in Canada?

How much of a dent will that make in child care costs?

Not much, statistics suggest.

But the discount varies depending where you live.

Parents of Torontonian babies will get less than 10 per cent knocked off their monthly child care bill — the median tops $1,676.

Quebec parents of young kids, meanwhile, could actually make a profit: The median monthly child care cost there is $152 a month, which would leave $8 a month left over.

Economists and the Parliamentary Budget Officer have noted new federal child benefits disproportionately benefit people who don’t need the extra cash, and do little to deal with lack of child care access or affordability.

How lack of affordable, accessible child care hurts the economy

The Canadian Centre for Policy Alternatives gathered the median monthly costs of child care for Canada’s largest cities from local government and administrative databases. Here’s how they stack up: 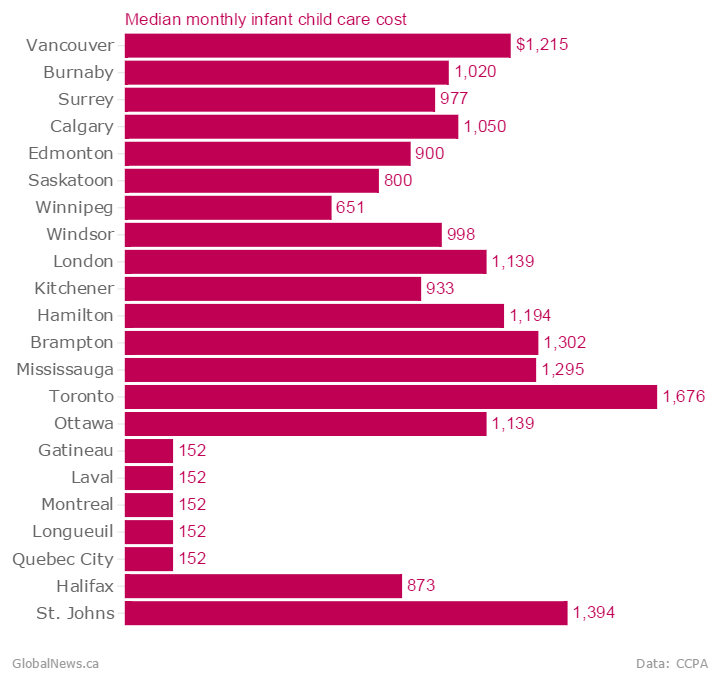 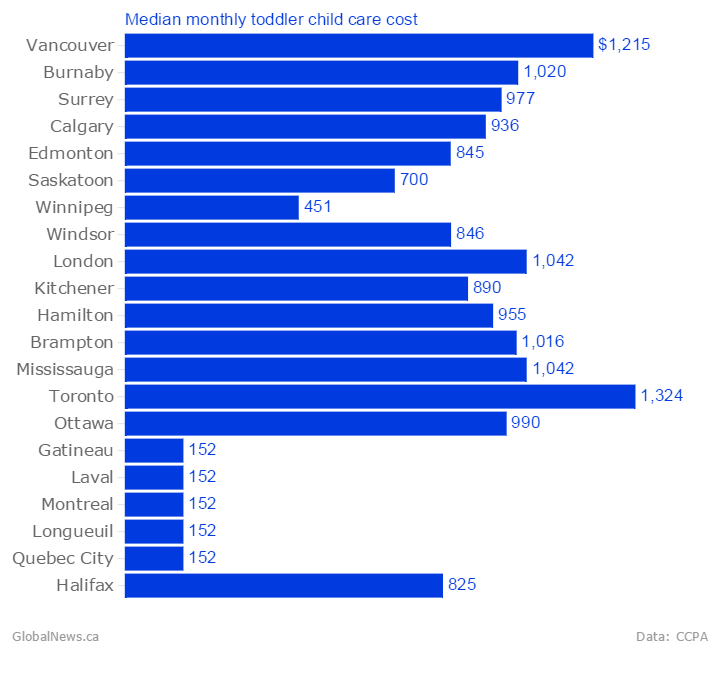 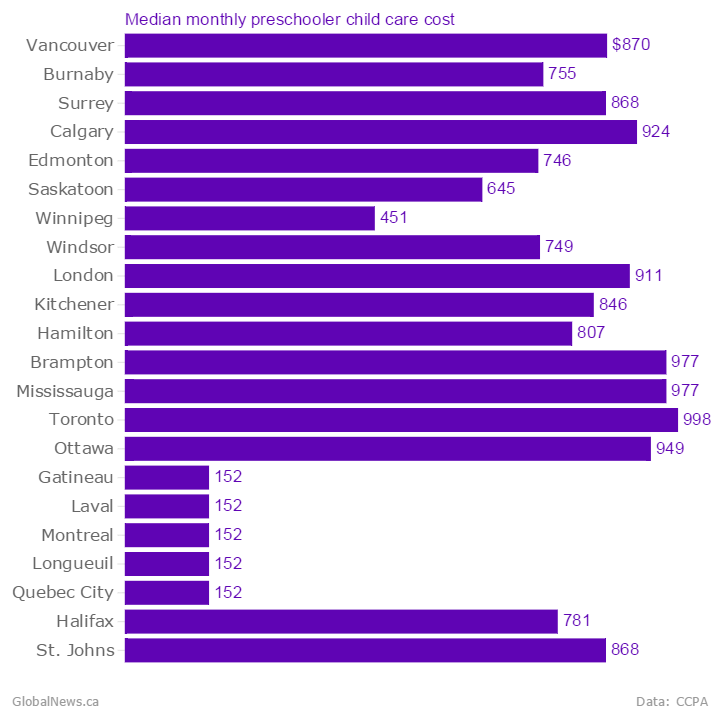 Global News has been inundated with messages from parents struggling to juggle work and child care.

Vancouverite Megan Hooft has been on child care wait-lists since 13-month-old Grayson was born. And she’s still several hundred people down the line.

Hooft and her husband are scrambling to put together a patchwork of care for Grayson: She’d work from home, in the evenings or on weekends. “But it’s not sustainable.”

Now she’s working four days a week, has her parents helping out and has a friend who’s agreed to take care of her son part time over the summer. Just two days of paid child care a week sets her back close to $700, she said. And she has no idea what will happen in September.

“I have friends here who don’t have parents or family in town; they don’t have that option. …

“You scramble, basically. You troll Facebook. You Google search all day. It’s a profession.”

Hooft, who works for an anti-poverty charity, doesn’t see the Universal Child Care Benefit helping her predicament much.

“With this $160, I’m going to buy diapers. It does absolutely nothing to help with child care,” she said.

Aniesa has become a stay-at-home mom by necessity.

” I am waiting until she starts full-time school so I can work because nothing will be enough for child care unless we are both working,” she wrote in an email.

“The UCCB and child tax help a lot with bills, mortgage, groceries –our necessities. But it is not enough to cover child care expenses if that’s what they are going for.”

Grace also found herself out of the workforce when even two salaries weren’t enough for her four children’s care.

“We struggled when we were both working –more debts and more people [and] bills to pay. We cut that off when I stayed home.”

“We would prefer the most simple solution, which is to tax everybody less and then everybody keeps more of their own money,” she said.

“It’s your own money that you’re getting.”

Tell us your story: How will the Child Care Benefit affect you? Will it help cover the cost of caring for your kids?