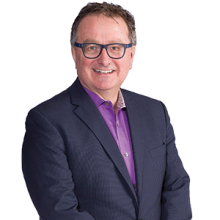 Richard Cloutier is co-host of the News on 680 CJOB, 4 to 7 p.m. weekdays and senior reporter Global News. Richard started at CJOB in December 1992. He has a passion for story-telling on all platforms, radio, digital and television.

Richard was born and raised in St Norbert, cutting his teeth in the job market at age 10 pumping gas for his dad at Cloutier Motors. He also worked for his older brother Curtis at Roadshow Sound. The DJ days brought out a love for music and performing. After political studies at the University of Manitoba and journalism at Carleton University, Richard did short stints in newspapering in Ottawa and Hamilton. CJOB was going to be a job for a few years but he fell in love with the sounds, the stories and interaction with Manitobans.  It’s so much fun working with some of the best journalists and story-tellers in the business.
Richard’s proudest achievement is his three children. His two daughters are each working on their second degrees in university and his son is working in the financial industry in Toronto.

Richard loves the arts, football, hockey and is still a work in progress at running and golf. Reading is a passion. You will find him at WPG Cycle spinning at 6 a.m.  Favourite saying: “Life moves pretty fast, if you don’t stop and look around once in a while you could miss it” Ferris Bueller

Our lives begin to end the day we become silent about things that matter. – Martin Luther King Jr.

The executive director of one of Winnipeg’s homeless shelter has been ousted while the entire organization undergoes an investigation and audit from the province’s Auditor General.

It’s easy to understand Shelly Hart’s frustration.  The Mayor of East St. Paul inherited a long-festering dispute between the thriving bedroom community and the City of Winnipeg – and it’s all over a single road.

Mark Chipman will rally the local business community and politicians at the Winnipeg Chamber of Commerce lunch Friday to get behind a $40 million multi-level addictions treatment centre.

Members of the Glenwood community have fought against change in their Winnipeg neighbourhood – change they say will alter the character of Glenwood, bringing in up to four renters on lots where once a single-family home existed.

Decision 2019: The inside story with Richard Cloutier

The Brian Pallister victory was thorough and his victory for the Progressive Conservatives shows the party is strong not only in rural Manitoba but suburban Winnipeg.

‘Be flexible and be smart’: Kinew says he would slow down health care changes, improve technology

In a 25-minute sit down interview with the NDP leader, Kinew argues the changes made in Manitoba health care have occurred too quickly, and the PC leader ignored calls from doctors and nurses to slow down.

Politics
September 4, 2019 6:00 am
‘Tough love’: Pallister says he’s not afraid to say ‘No’ to get results in Manitoba health care

Brian Pallister admits not everyone likes the changes he has made in healthcare, but the Manitoba Progressive Conservative leader says it is necessary and to expect more shifts in care if he is re-elected Premier next week.

Dispelling rumours of plans to bow out midway through a second term, Brian Pallister says he will serve an entire second term if the Tories are elected next week in Manitoba.

Richard Cloutier, co-host of the News on 680 CJOB, is in Melfort Sask., covering the Humboldt bus crash sentencing hearing for Global News Radio.

On the front lines of Winnipeg’s meth crisis

As part of an in-depth investigation into the city’s ongoing meth crisis, Global News / 680 CJOB journalists Richard Cloutier and Joe Scarpelli were given exclusive behind-the-scenes access to the people on the front lines in the fight against meth. This is the first of a four-part series.

One of Winnipeg’s former mayors is moving back to the city after a stint in Ontario as an MPP. Glen Murray announced Wednesday he will be joining a private IT firm.

Public funding from tax increment financing could be used directly for the construction of highrises at True North Square and the adjacent Sutton Place Hotel.

Richard Cloutier, co-host of the News on 680 CJOB, 4 to 7 p.m. weekdays, reported in from John Day, OR., on his Cycle of Hope in support of Habitat for Humanity.

Richard Cloutier, co-host of the News on 680 CJOB, 4 to 7 p.m. weekdays, made it to Redwood, OR on the Cycle of Hope in support of Habitat for Humanity.

The major worry about the Delta variant is not that it makes people sicker, but that it spreads far more easily fro… twitter.com/i/web/status/1…