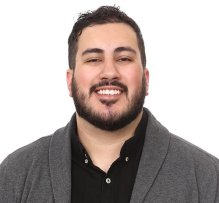 Moises Canales-Lavigne is a digital broadcast journalist who joined the Global News team in Regina in July 2021.

Born in Saskatoon and raised in Regina, Moises has called the Land of the Living Skies his home his entire life.

He kickstarted his journalism career in Kindersley as a radio news anchor and reporter, among other roles. Later on, Moises returned to Regina as a reporter with 620 CKRM before making the move to Global Regina.

Whether it’s sports, politics or events happening in the community, Moises is eager to share stories of what’s happening in and around the province he grew up in.

Outside of work, Moises enjoys cheering on his favourite sports teams, discovering new music and getting acquainted with old favourites, and spending time with his family, friends, and dogs.

One thing about Moises is that he is fluent in English, French and Spanish. He hopes to strengthen his command of German, which he studied in university, and learn more languages in the future.

Community Contributors are hand-picked by Global News to write about their area of expertise. Their views are their own and do not necessarily represent Global News. See more →