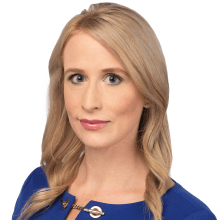 Lauren’s career has taken her throughout the country and across the world, with her first break on the airwaves in Melbourne, Australia.

The lure of the 2010 Vancouver Olympics brought her back home, where she worked as a videographer during the Games. From there, she worked her way up the ranks in radio and television news in B.C., Alberta and Saskatchewan, most recently spending nearly five years in Canada’s hidden paradise, the Okanagan valley.

Lauren thrives off of live, breaking news. She’s covered massive forest fires and unprecedented floods that forced thousands of people to flee their homes. She was often the one informing many of those residents via live reports on television and social media that they needed to evacuate to safety. Providing people with vital information in their greatest time of need gives Lauren a huge sense of value and pride in the work she does.

In her spare time, Lauren loves to travel. From trekking along the Inca Trail to the magical hidden city of Machu Picchu to climbing Mount Vesuvius solo on a spur of the moment trip to Italy, or camping in Canada’s backcountry, Lauren loves to explore the many wonders our world has to offer. She also spends all the time she can with her dog, Nigel (who has made his fair share of appearances on Global News, as well).