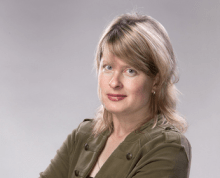 Kristen Robinson was born and raised in Vancouver and is thrilled to work for her hometown station.

Kristen graduated from BCIT’s broadcast journalism program and got her start in radio before answering the phones and working the news desk at Global BC. She then moved to Vancouver Island and spent several years reporting for CHEK News in Nanaimo and Victoria before returning to Global BC, the station she grew up watching when it was known as BCTV.

After reporting and producing part-time since 2013, Kristen joined the Global BC news team full-time in 2021.

Always a newshound, Kristen believes in the power of journalism to right wrongs, and her favourite part of the job is exposing injustices.

When not working, she enjoys walks, travel, reading, and watching movies.