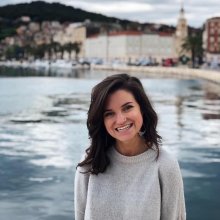 As Global Edmonton’s Editorial Assistant, Jessica Robb works behind the scenes to help make sure your story gets told.

Born and raised in this city, there is no other place she would rather be.

Graduating from MacEwan University with a Bachelor of Communications with a major in journalism in June 2019, Jessica was welcomed to the Global Edmonton team later that month.

Starting her career at Global Edmonton has provided Jessica with unique opportunities and valuable experience. She was part of a national team that worked to identify victims from flight PS752 hours after the crash on January 8, 2020. Jessica was working on the assignment desk the night of the bus rollover at the Columbia Icefields in Jasper in July 2019. She was part of the planning that ensured a team was on scene within hours.

Branching into broadcast, Jessica hopes to provide a safe space for people to share their stories. Her proudest accomplishment is telling the story of 15-year-old Roderica Ribbonleg, a murdered Indigenous girl from Northern Alberta, and the 127-kilometre Walk for Justice held in her honor.

Outside of work, Jessica is an avid runner and soccer player. She will stop to pet every dog and never says no to an oat milk latte.

02:00
Global News Hour at 6 Edmonton
How Edmonton drag queens are keeping the show going during a pandemic

02:00
Global News Hour at 6 Edmonton
Spruce Grove family gets help as it tries to raise money for girl’s medical treatment

01:56
Global News Hour at 6 Edmonton
A barber, a band and a bubble: How an Edmonton hairdresser ended up inside Rogers Place
Health
December 27, 2020 5:44 pm

Three Edmonton doctors are using the power of social media to spread facts about the COVID-19 pandemic. Continue reading →

It’s been a busy holiday season for everyone. While the number of people travelling is down, the amount of cargo being shipped is going up. Continue reading →

‘The documentary is like a letter to my wife’: Edmonton man produces film about Iran plane tragedy

The husband of one of the Edmonton victims in an airplane that was shot down in Iran in early 2020 has produced a documentary about what the families have gone through following the tragedy. Continue reading →

Keeping the homefires burning: A 127 km walk for justice for Roderica Ribbonleg in John D’Or Prairie

It was so much more than just a march for justice for Roderica Ribbonleg and Malena Loonskin that drove residents to walk 127 kilometres from John D’Or Prairie to High Level in northern Alberta. Continue reading →

A barber, a band and a bubble: How an Edmonton hairdresser ended up in the NHL’s hub at Rogers Place

There are thousands of stories published online, in newspapers, or in magazines that Hingston & Olsen could make a part of their series. So what makes one stand out? Continue reading →

Group of University of Alberta scientists steps up with hand sanitizer

Maintaining social distance while working in a lab to make hand sanitizer is a task a group of University of Alberta scientists didn’t think would be their new reality. That changed earlier this week. Continue reading →

‘My love language is giving to people’: How an Edmonton baker is giving a sweet surprise to seniors

“We just decided to give free cupcake bouquets to anyone elderly, 70 and over, who are in isolation,” said Tanya Nafe of Sweet Bouquets Cupcakes. Continue reading →

The worst-kept secret in Edmonton ended in a public Valentine’s Day engagement for a local couple. Continue reading →

A snake that had been missing since October emerged from hiding last week — to the delight of her owner and the shock of his downstairs neighbour. Continue reading →

Bloom Cookie Co.’s cookie-gram project was already in the works, but a disturbing phone call gave the bakery an opportunity to raise awareness for an important cause. Continue reading →

Curling Alberta has cancelled the 2021 competitive season because of the COVID-19 pandemic, trib.al/cXWcodv #COVID19ab

The Beach is a medical-free zone for kids staying at the @StolleryKids Hospital. As @MorganRBlack explains, the are… twitter.com/i/web/status/1…