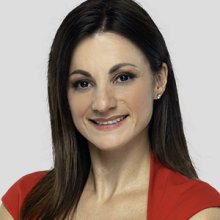 Jennifer has always loved news. As a child she would watch the news instead of cartoons.

So, her love of current affairs led to a degree in International Studies from the University of Manitoba. She also studied at the University of British Columbia. She received her TV and radio arts diploma at the Northern Alberta Institute of Technology.

She began her broadcasting career in Edmonton hosting a segment on a cable TV show, and working as a production assistant at ITV (now Global Edmonton). She moved on to Saskatchewan where she worked in radio, as well as a reporter and anchor at Global Regina, and Global Saskatoon. She began reporting at Global BC in 2007.

Some major stories Jennifer has had the opportunity to work on at Global BC include reporting on a plane that crashed into a Richmond apartment building. She was also the first TV news reporter to cover Robert Dziekanski’s story. While in Saskatchewan, two news series she reported and produced were used as training tools by the Government of Saskatchewan and Saskatoon Police Force.

In her spare time, Jennifer loves to be with her family, read, cook, and travel. She speaks, reads and writes in six languages.