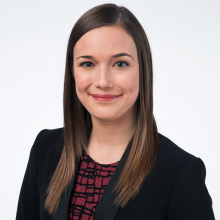 Danica Ferris joined the Global Lethbridge team as a Videographer in April 2019, after graduating from the Broadcast News program at SAIT.

She was born in Calgary but spent 10 years in British Columbia, where she graduated from high school and completed her Bachelor of Communications at Simon Fraser University. Upon finishing her undergrad at SFU, Danica decided to follow a gut feeling and move back to Calgary to attend SAIT in the fall of 2017.

An athlete through and through, she brings her competitive spirit to every story and wants to tell things the “right way.”

Danica grew up playing every sport she could, but spent most of her time on the soccer field. She now obsessively follows hockey and spends most of her spare time watching and reading about sports.

You can also find her on the golf course, touring craft breweries, or binge watching the same three TV shows over and over again.