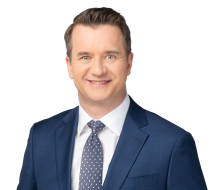 Alan Carter has been the anchor of Global Toronto’s flagship newscast, Global News at 5:30 & 6 since 2015.

In addition to anchoring Global News at 5:30 & 6 Carter hosts, Focus Ontario and is also the host of, The Alan Carter Radio Program in Toronto, Hamilton and London.

After graduating from Ryerson University in 1989, Carter began his journalism career as an anchor and producer for CKVU in Vancouver. While there, he covered the 1994 Stanley Cup playoff riots and was tear gassed alongside unruly rioters, all in the name of getting the story.

After moving to Edmonton, Alberta in 1997, Carter anchored for A-Channel News. Missing his family in Ontario, he moved home to Toronto in 1999 to join the Global Toronto team as a crime reporter, covering everything from local shootings to the police taser debate. To demonstrate the effects to viewers, Carter absorbed 50 thousand volts after being tasered by Toronto Police. In 2003, he made the jump to daytime television on Morning News, later becoming Global Toronto’s managing editor.

Carter can also be heard weekdays at noon on 640 Toronto, CHML in Hamilton and CFPL in London. The Alan Carter Radio Program covers the biggest stories of the day and holds decision makers to account.   Daily segments from the program can be found wherever you download your favourite podcasts.

When he’s not covering the news, you’ll find Carter exploring the incredible Ontario outdoors – on his mountain bike, his snowboard or his longboard. When it’s time to come inside, Carter likes to shuffle things up with some poker – and that’s no bluff.