48% of Canadians not concerned that other countries get coronavirus vaccine 1st: poll

By Maan Alhmidi The Canadian Press

A new poll suggests most Canadians aren’t currently worried that people in other countries might get a COVID-19 vaccine first.

Thirty-seven per cent of respondents to a survey conducted by Leger and the Association for Canadian Studies say they are very concerned that Canada may not receive doses of a new COVID vaccine as early as the United States.

“That’s not necessarily low, but I think most pundits would have expected this number to be much higher,” said Leger executive vice-president Christian Bourque.

“Getting a vaccine before other countries doesn’t seem to be “a major (issue for the Liberal government), which is contrary to what we might have thought when the prime minister actually said that we would not be the first ones to get doses,” Bourque said. 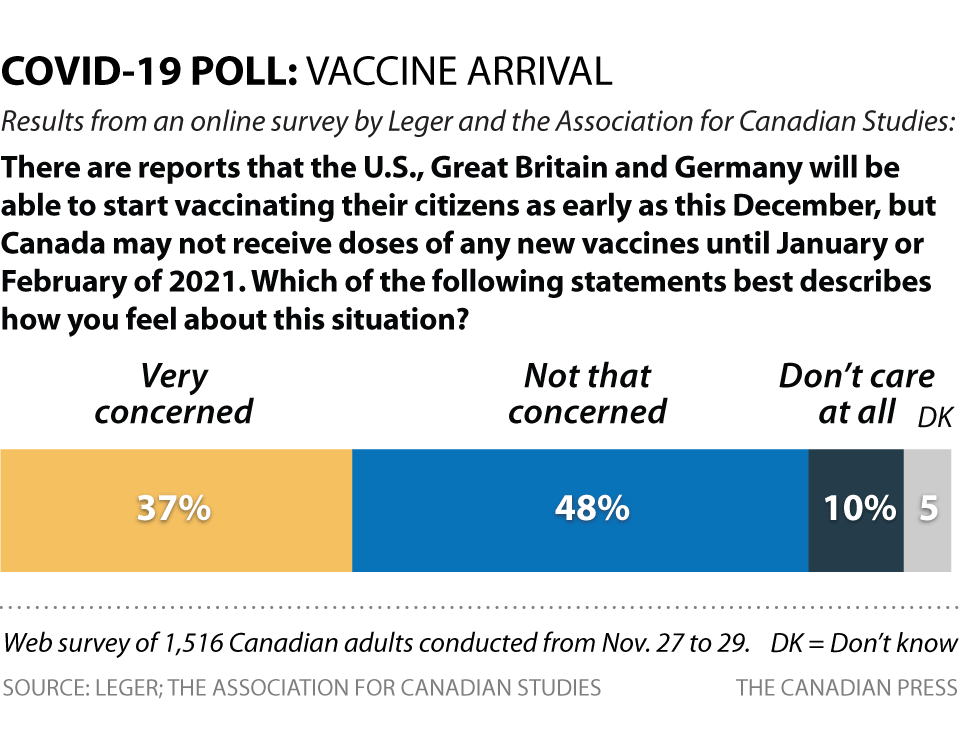 The amount of concern regarding getting a COVID-19 vaccine first varies along party lines, with 45 per cent of self-identified Conservative supporters saying they are very concerned that Canada may not receive doses of a new COVID vaccine at the same time as other countries. Only 38 per cent of Liberal supporters say they are concerned.

“The Conservative voters have the highest rate of people who say they’re very concerned about not getting (a vaccine) first,” said Bourque. “It’s probably just because they tend to have a negative view or perspective on the Trudeau government, period.”

Furthermore, with the likelihood of multiple vaccines arriving over a period of time, just 28 per cent of respondents said they will take the first vaccine they can get, while 45 per cent said they will wait for other vaccines to become available.

Forty-one per cent of respondents say they want the vaccine to be mandatory for all Canadians and 55 per cent say it should be given on a voluntary basis.

But the poll suggests that the vast majority of Canadians want people entering Canada to be vaccinated against COVID-19, with 83 per cent of respondents saying vaccines should be required. Also, nearly two-thirds of those surveyed said employers should be able to demand that workers be vaccinated.

The poll suggests that 65 per cent of Canadians intend to take a COVID-19 vaccine when it’s approved by Health Canada and available for free while 17 per cent say they don’t intend to.

“That proportion used to be a bit higher, closer to 70 per cent in the spring. Since then it’s gone down,” said Bourque. “Over the past three months, when we’ve actually asked the question again, it is fairly stable in the mid-60s.”

“It really seems that two-thirds of us are kind of committed to this idea of getting the vaccine when it’s available.”

The poll of 1,516 adult Canadians in an online panel was conducted from Nov. 26 to Nov. 29 and cannot be assigned a margin of error because internet-based polls are not considered random.