Household debt ratio drops to 158% of disposable income, down from 175%

The agency said household credit market debt as a proportion of household disposable income dropped to a seasonally adjusted 158 per cent, down from 175 per cent in the previous quarter.

READ MORE: What to do if your mortgage deferrals are almost over and you can’t pay

In other words, the average Canadian now owes $1.58 per dollar of disposable income, a meaningful decrease for a number that’s been hovering above $1.75 since the start of 2016. 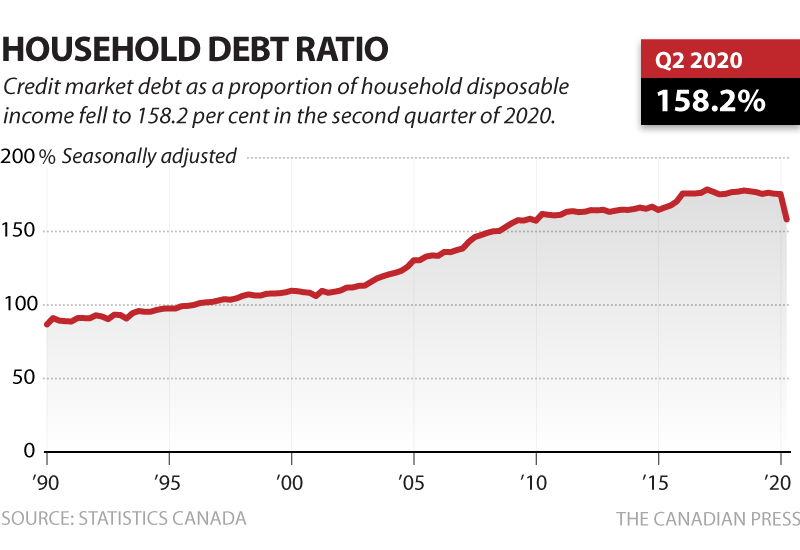 Canadians also rushed to build up their savings as the pandemic shut down parts of the economy, the data shows.

Government transfers more than offset a reduction in employees’ compensation, boosting household disposable income by nearly 11 per cent. A decline in household spending of nearly 14 per cent also contributed to the savings spike.

Even so, the agency noted that annual trends show that lower-income households tend to have a higher debt to disposable income ratio.

The household debt service ratio, measured as the total obligated payments of principal and interest on credit market debt as a proportion of disposable income, dropped to 12.4 per cent from 14.5 per cent as payment deferrals related to the COVID-19 pandemic reduced the obligated principal paid in the second quarter.

Overall, credit market debt totalled $2.33 trillion at the end of the quarter including $1.55 trillion in mortgage debt and $779.4 billion in consumer credit and non-mortgage loans.