3 of 4 Americans want masks to be mandatory amid coronavirus pandemic: poll

By Michael R. Blood and Emily Swanson The Associated Press

Three out of four Americans, including a majority of Republicans, favor requiring people to wear face coverings while outside their homes, a new poll finds, reflecting fresh alarm over spiking coronavirus cases and a growing embrace of government advice intended to safeguard public health.

The survey from The Associated Press-NORC Center for Public Affairs Research also finds that about two-thirds of Americans disapprove of how President Donald Trump is handling the outbreak, an unwelcome sign for the White House in an election year shaped by the nation’s battle with the pandemic.

More than four months after government stay-at-home orders first swept across the U.S., the poll spotlights an America increasingly on edge about the virus. The federal government’s response is seen as falling short, and most Americans favor continued restrictions to stop the virus from spreading even if they might hamstring the economy.

Support for requiring masks is overwhelming among Democrats, at 89%, but 58% of Republicans are in favor as well. The poll was conducted before Trump, who for months was dismissive of masks, said this week that it’s patriotic to wear one. 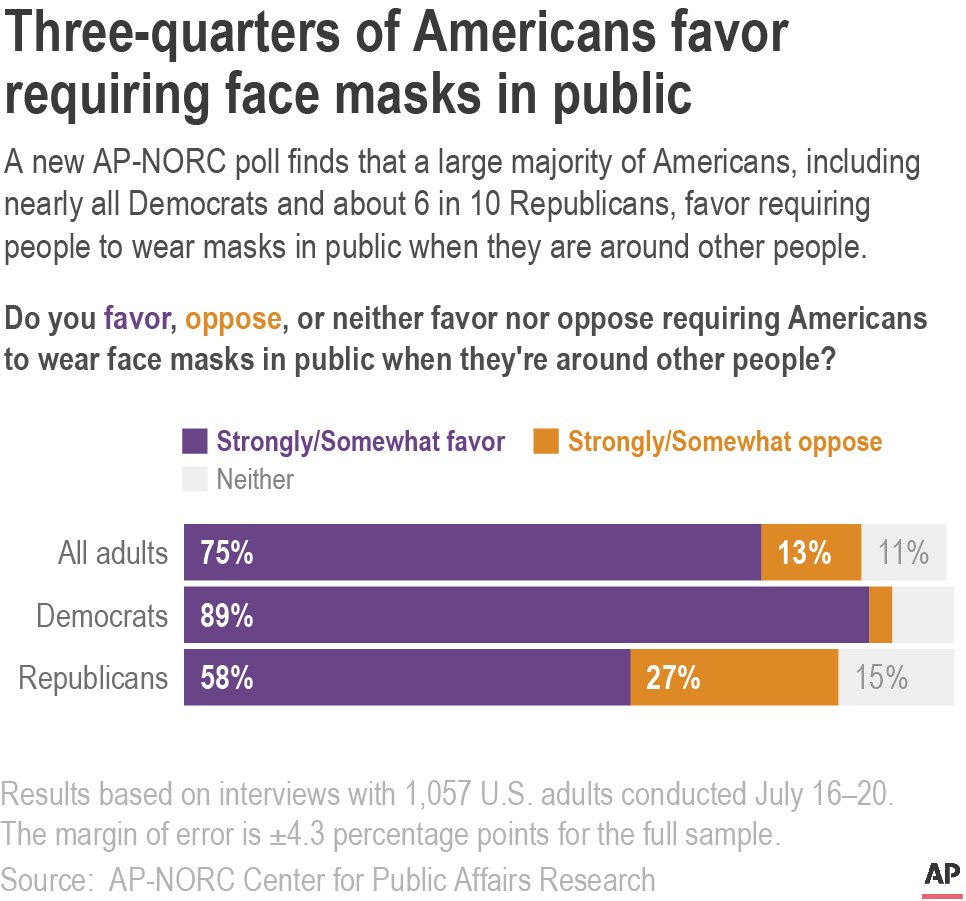 “Not wearing a mask, to me, poses a greater risk of spreading the COVID,” said Darius Blevins, a 33-year-old Republican-leaning independent from Christiansburg, Virginia, who works in bank operations. Blevins said he wears a mask in public because “it’s much more effective than not wearing the mask.”

It’s an opinion echoed by data analyst James Shaw, an independent who tilts Democratic. “If you understand the facts, there is really no issue,” said Shaw, 56, of Noble, Illinois. “The data is crystal clear.”

For months health officials have said several simple steps could save lives — washing hands frequently, staying away from crowds, especially while indoors, and pulling on a mask when heading out to the supermarket, the office or a restaurant. And despite heated rhetoric about masks in some corners, 95% of Democrats and 75% of Republicans said they’re wearing face coverings when leaving the house. Overall, 86% of Americans say they’re doing so, compared with 73% in May.

As the tally of coronavirus infections continues to climb, state and local governments have tried to find a balance between restrictions intended to limit the virus’ spread, such as closing bars and indoor dining at restaurants, and getting workers back on the job after many businesses were idled and millions of people were left jobless by the initial stay-at-home orders.

Read more: Only 1 in 10 Americans want schools to reopen without coronavirus restrictions: poll

The U.S. has more than 4 million known cases of the coronavirus, with many more undetected, and more than 140,000 people have died of it this year. The U.S. leads the world in confirmed cases and deaths and ranks near the top on a per-capita basis. California, which earned plaudits from health officials for aggressive early action that included the first statewide stay-at-home order, is among states seeing a surge. On Wednesday, California passed New York for the most confirmed cases with 409,000.

About half of Americans now say they’re extremely or very worried about themselves or someone in their families being infected with the virus — about the same as in March, but a steep increase from June, when just 32% said they were that concerned. Republicans were less likely to be anxious about the illness, but concern rose among members of both parties. 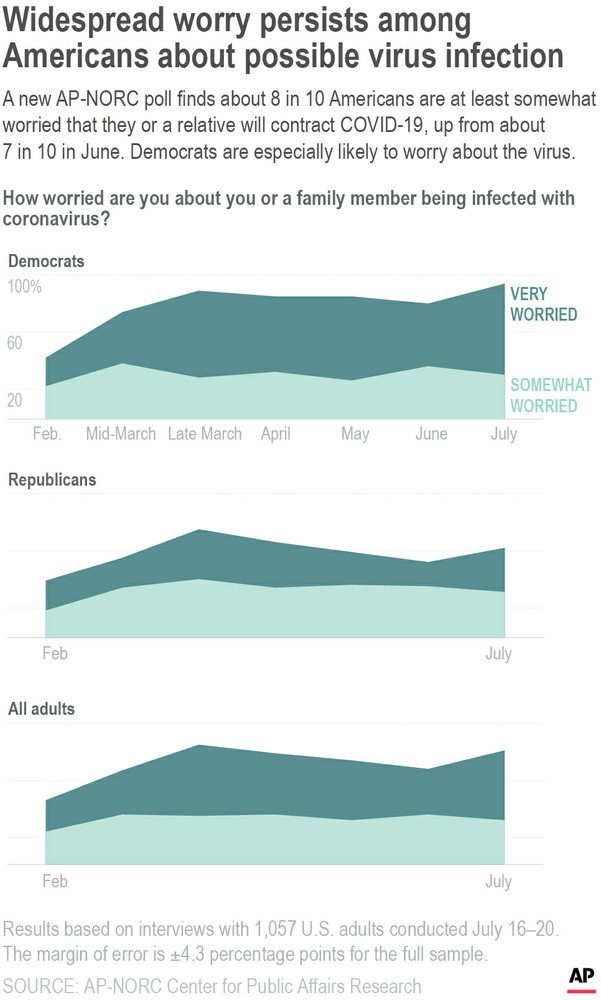 There were other signs of continued unease. Support for limiting the size of gatherings ticked back up to 66%, after sliding for several months to a low of 59% in June. Eighty-five percent of Americans say they’re avoiding large groups.

Nearly three-quarters of Americans said restrictions to slow the spread of the virus should override concerns about damaging the economy, but California retiree Kimberly Greenan said she favors relaxing rules and allowing people to get back to work. Greenan says she wears a mask on trips to the grocery store and at church, but not if she’s walking in a park, away from other people. 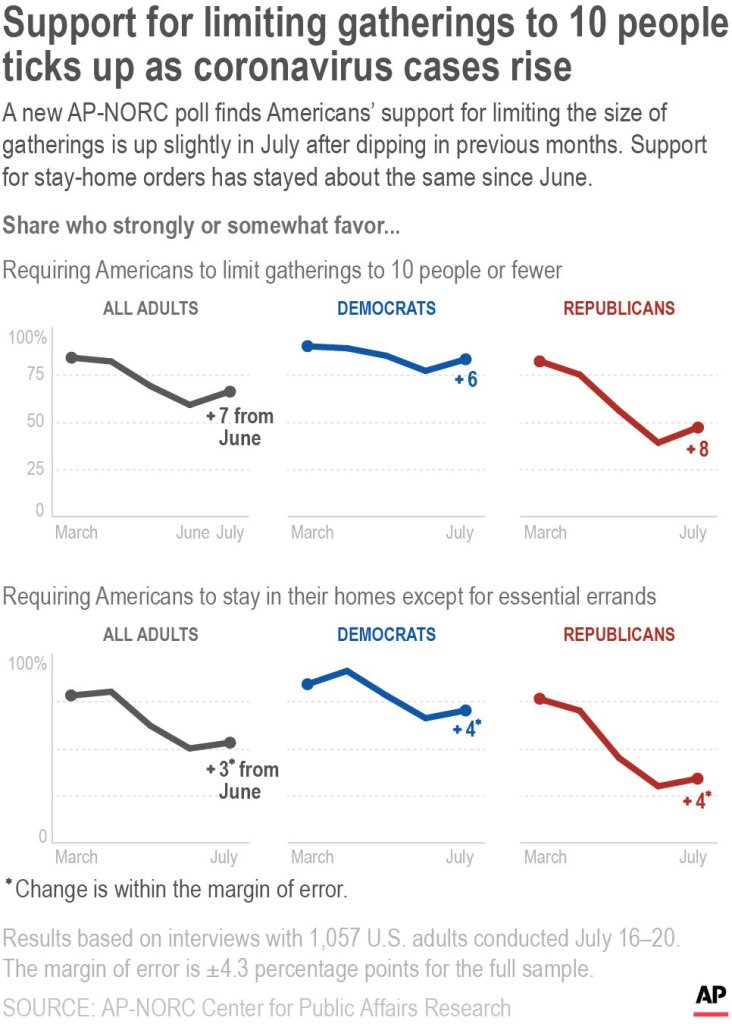 “If people are vigilant, if they do what’s right, this economy could come back,” said Greenan, 67, a Republican and former accountant and teacher from Santee, in the San Diego suburbs.

While tough steps were needed initially, “for the most part people are ready to get on with their lives,” she said. “I don’t think tying everyone down is the right move.”

The poll finds that only 24% of Americans approve of the federal government’s response to the outbreak, with disapproval hitting 55%, ticking up 7 percentage points from May. The remainder did not have an opinion either way.

Trump’s recent endorsement of masks came after he said in April that “I just don’t want to wear one.” The Republican president was not seen wearing a mask in public until July 11, months after the coronavirus took hold in the U.S. Trump has recently suggested the virus is under control, but he changed course Tuesday, saying it will “get worse before it gets better.”

“We need a mandate at the federal level that will uniformly require masks across the country,” she said in a statement. “This isn’t a political issue.”

The AP-NORC poll of 1,057 adults was conducted July 16-20 using a sample drawn from NORC’s probability-based AmeriSpeak Panel, which is designed to be representative of the U.S. population. The margin of sampling error for all respondents is plus or minus 4.3 percentage points.