By Mia Rabson The Canadian Press

Most major Canadian cities saw drastic improvements in air quality over the last two months as COVID-19 kept people at home instead of on the roads.

Experts say cleaner air, even just for a few weeks, can reduce illnesses like asthma attacks and heart attacks, which have been shown to spike when air pollution is at its worst, and which are also linked with higher risk of serious illness and death from COVID-19.

Chris McLinden and Debora Griffin, both scientists in the air-quality research division at Environment and Climate Change Canada, spend their days using satellite sensors to measure air quality and the presence of pollutants like ozone, carbon monoxide and nitrogen dioxide.

Since the middle of March, when most provinces began shuttering businesses and public spaces and asking people to stay home, their maps have shown significant drops in levels of nitrogen dioxide, one of the main gases produced when fossil fuels are burned to power and heat vehicles and buildings.

“It’s what we call an unexpected, natural experiment,” McLinden said. “It’s not really something you can duplicate in a lab.”

McLinden said nitrogen dioxide is one of the best measures for a day-to-day comparison because it tends to dissipate much faster than carbon monoxide, so its presence is a better indicator of changes in a short period of time.

In cities like Toronto and Montreal, the nitrogen dioxide levels fell more than 30 per cent, which McLinden said is mainly because there were fewer cars on the roads, and factories either closed or cut production. In Edmonton and Calgary, the drop was closer to 40 per cent, he said. In Atlantic Canada, where the levels are typically very low to begin with, the maps can’t pick up the data well enough to describe any reduction.

READ MORE: Could the COVID-19 pandemic be an environmental inflection point?

McLinden said the maps they are using don’t measure the levels of fine particulate matter, which is one of the biggest concerns for human health, but he said science suggests those would also be falling, though probably not quite as much as nitrogen dioxide.

In April, international air quality technology company IQAir found significant drops in 10 world cities of fine particles, known as PM2.5 (meaning particulate matter less than 2.5 microns across, a small fraction of the width of a hair). The study showed PM2.5 down 60 per cent in Delhi, compared to the same three-week period in 2019, and drops of 54 per cent in Seoul, 31 per cent in Los Angeles and 25 per cent in New York City.

Miriam Diamond, a professor of earth sciences at the University of Toronto, said even a temporary drop in air pollution can have a positive impact on human health. Nitrogen dioxide and PM2.5 can inflame air passages and trigger asthma attacks, heart attacks and strokes.

Health Canada estimated last year that more than 14,000 Canadians die each year because of exposure to air pollution.

“A couple of months (of reduction) will do us well because we’re avoiding air-pollution-related deaths and illness, especially at a time when we are really concerned about the respiratory system,” Diamond said.

“Hopefully it is also having a benefit of reducing the severity of symptoms should you get COVID-19 because your lungs are in better shape.”

Dr. Sandy Buchman, president of the Canadian Medical Association, said he suspects studies will show the drop in air pollution during the slowdown will coincide with fewer admissions to hospital for heart attacks and asthma. That in turn, he hopes, will drive policies to cut air pollution permanently.

“I think we have to see the data but it could speak volumes to the Canadian public, politicians and public health experts,” said Buchman.

McLinden also said the data he and Griffin are collecting right now will improve modelling for where air pollution is coming from and how best it can be improved over the long term. 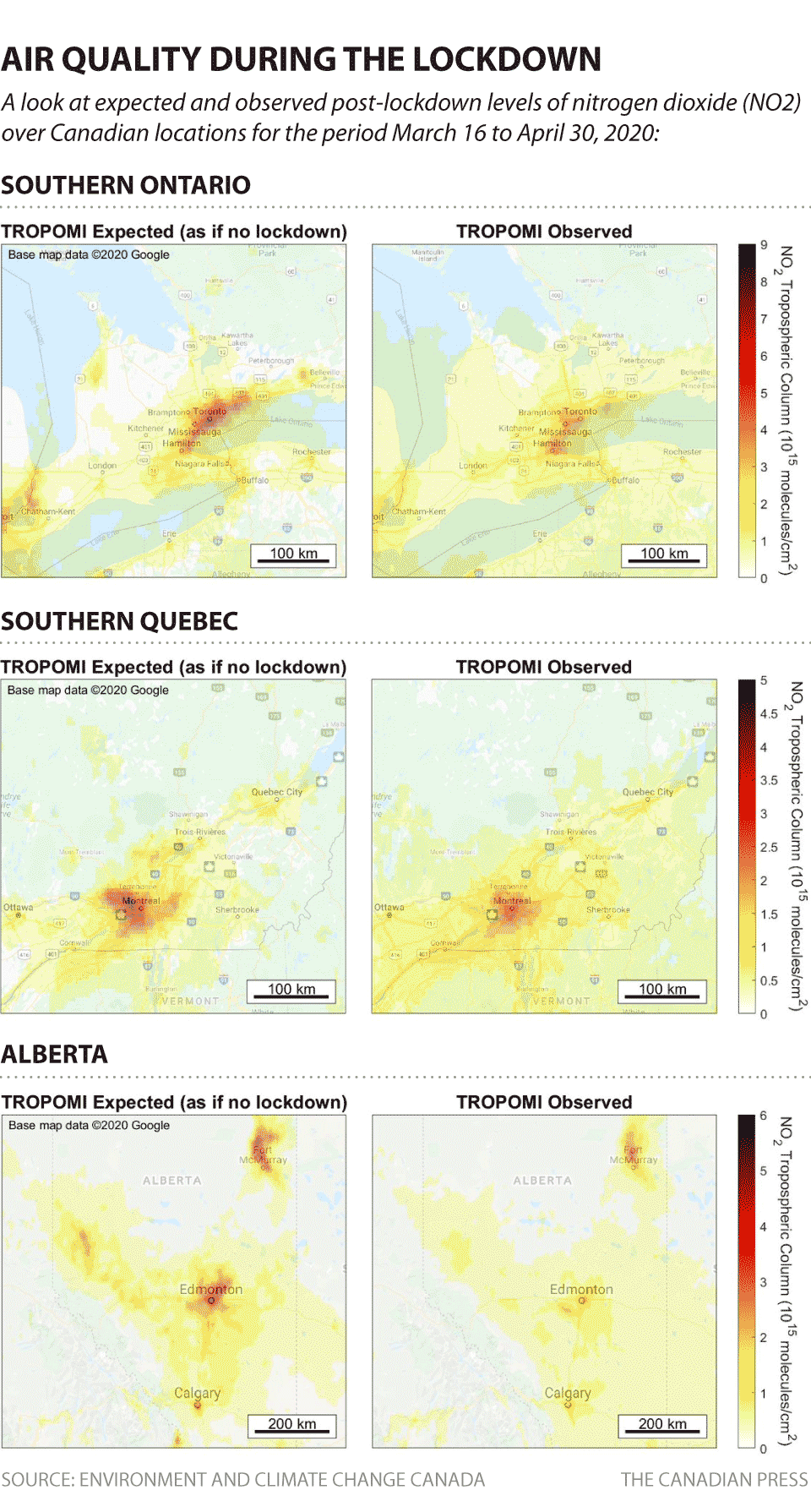