The Canadian Transportation Agency is investigating 570 of more than 3,000 complaints filed against airlines like Air Canada and Sunwing Airlines, alleging they failed to accurately explain the reasons for flight delays or cancellations.

In a letter from the CTA to applicants dated Feb. 24, 2020, the agency said it conducted a “comprehensive review” of all complaints filed between Dec. 15, 2019 and Feb. 13, 2020 relating to the new air passenger bill of rights.

Under the new laws, airlines are required to pay up to $1,000 to compensate costs incurred due to flight delays or cancellations within the airline’s control. If an airline denies compensation they are mandated to explain why.

“This review has revealed that the Agency received 3,037 such applications during this period,” the CTA said.

“The Agency has concluded that this is too large a number of complaints to be examined in a single proceeding, with the Agency’s existing resources.”

The inquiry is investigating claims that Air Canada, WestJet, Sunwing, Air Transat, Swoop and United Airlines allegedly misrepresented or failed to accurately communicate why passengers’ claims for compensation were being denied.

Global News reported that nearly a dozen Air Canada passengers who alleged the airline intentionally referenced the wrong flight numbers or changed the cause of flight delays in order to avoid paying compensation under new rules.

More than a dozen other passengers later came forward alleging similar conduct by Air Canada and other air carriers.

Global News obtained the details of 559 complaints filed against airlines being examined by the CTA inquiry.

Air Canada, the country’s largest airline, was targeted with the most complaints, 371, alleging the company failed to accurately explain the reasons for flight delays or cancellations.

Swoop, a discount carrier, had 18 complaints and has carried two million passengers since the airline launched in June 2018. Smaller airlines, like Swoop or Flair, are required to pay anywhere from $125 to $500 for delays under the new passenger protection regime. 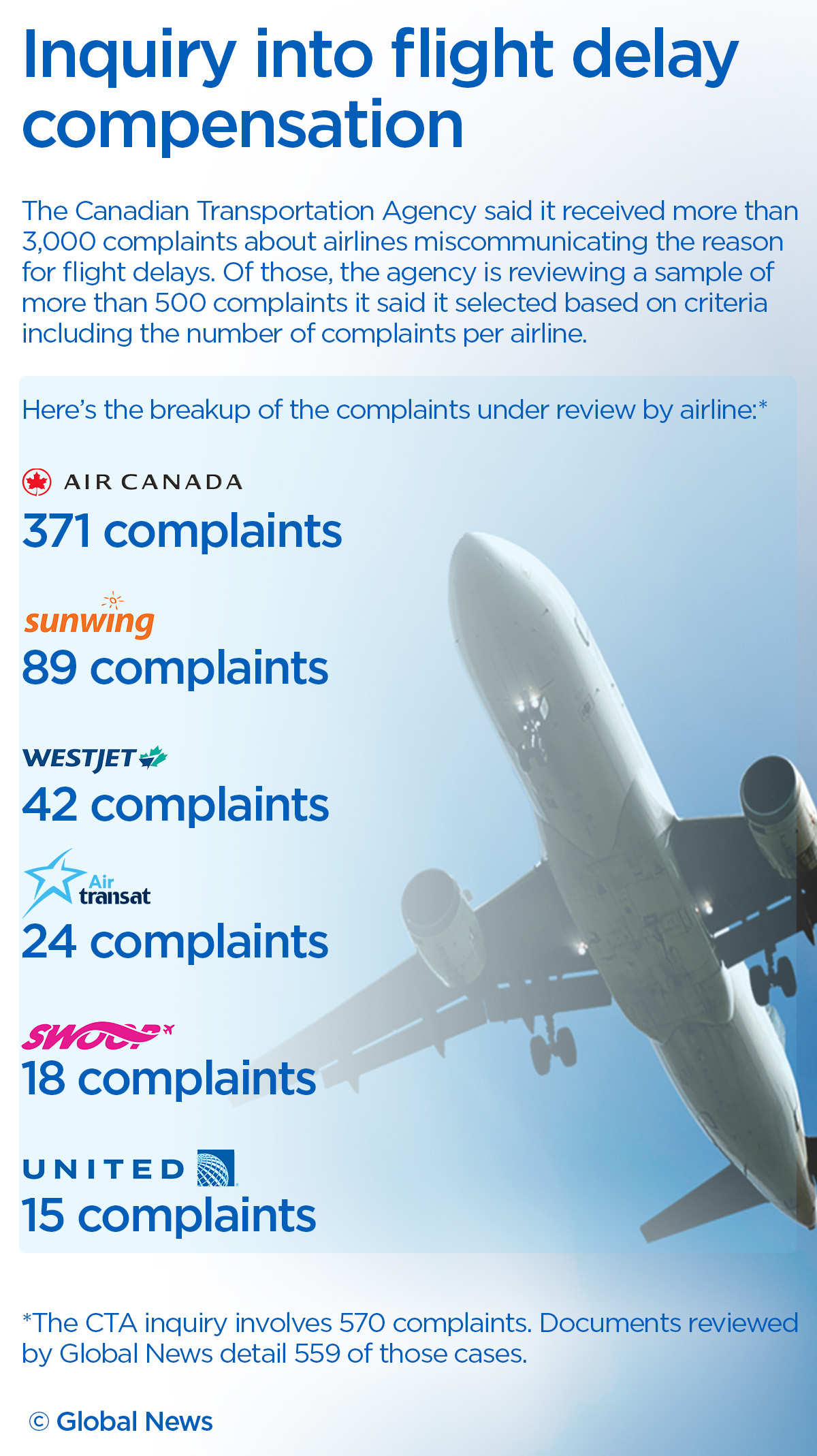 Air Canada has said its policy is to “fully abide by the APPR.”

“We have devoted considerable resources to meeting the requirements, including hiring additional staff to process claims,” Air Canada statement. “Our aim is to ensure all customers have a seamless journey and receive excellent service throughout.”

READ MORE: Changes to air passengers’ rights are now in effect. Here’s what you should know

The airline said it’s carried 25 million people since the first phase of the new passenger regulations kicked July, resulting in a small number of complaints, roughly 0.0014 per cent, relative to the volume of customers.

“While we will decline to discuss specific cases, we will say that due to this complexity, it can take time to investigate the true root cause of any delays and properly evaluate claims,” Air Canada said.

Swoop said the company is “fully cooperating” with the CTA investigation.

“We are proud to have carried more than two million travellers to date, with the majority of flights on time and few complaints given the high number of passengers,” Swoop spokesperson Larissa Mark said in an email.

Air Transat and Sunwing said they would not comment on the complaints as the “CTA process in ongoing.”

WestJet, and United Airlines did not respond to requests for comment from Global News.

Fredericton resident Jesse Saindon and his wife were flying back home from a Hawaiian vacation in February that took them from Maui to Vancouver and then on to Montreal. On the final leg of their trip from Montreal to Fredericton, their flight was cancelled due to “crew constraints.”

Air Canada later denied his claim for compensation. As in several other cases viewed by Global News, the airline’s response didn’t reference the correct flight and the reason for the delay had been changed to “maintenance.”

Saindon’s case was chosen to be part of the inquiry, but he said he was cautiously optimistic about any outcomes.

“It doesn’t seem like, in Canada or in a lot of the world, companies that cheat people out of things get their feet held to the fire very often, so we’ll see what happens,” Saindon told Global News.

Airline passenger rights advocate Gabor Lukacs said he is worried the CTA has “cherry-picked” cases to investigate that could be favourable to the airline.

“I’m troubled by the lack of transparency.”

Lukacs said he believes the inquiry was only ordered after public outcry and not because there was genuine determination to enforce the law.

“We’ve had many cases were passengers were clearly owed compensation,” he said. “I have very little faith in the impartiality of this inquiry.”

Some Air Canada passengers who came forward to Global News have been told claims for which the airline initially agreed to compensation were actually approved in error.

Evan Chung said his claim for a four-hour delay on a flight from Toronto to Vancouver on Dec. 19 was rejected even as his partner’s claim for the very same flight was approved.

When Chung pointed that out in correspondence with Air Canada, the company wrote back, saying his partner’s claim had been approved by “mistake.”

“No payment should have been made as APPR compensation does not apply to this flight,” the airline said in an email viewed by Global News.

On the day of the flight, Chung and his partner had received a flight notification indicating “flight readiness” and “crew availability” as reasons for the delay. Staffing issues are generally considered within an airline’s control and eligible for compensation under the regulations that came into effect Dec. 15.

But Air Canada told Chung that “the crew availability issue was due to uncontrollable weather conditions affecting incoming crew members. Therefore the root cause of the issue affecting this flight was weather.”

Kerry O’Brien-Macdougall had a similar experience.

After her family’s flight from London, Ont. to Thunder Bay, Ont. was cancelled on Dec. 31, only her husband’s claim for $700 was initially approved. When O’Brien-Macdougall demanded that Air Canada grant compensation to herself and her daughter as well, the airline wrote the initial claim approval was an error.

O’Brien-Macdougall’s flight notification indicated the reason for the flight disruption was a technical issue on the inbound aircraft, something Air Canada later described as a “safety-related” maintenance issue.

European regulations also do not exempt airlines from providing compensation when delays are tied to maintenance issues. Aviation experts who testified before the House of Commons have indicated the EU rules have resulted in airlines more promptly addressing mechanical problems.

According to the CTA, the official leading the inquiry is required to submit a summary report of the investigation to the agency by March 26, 2020.