A poll probing people’s knowledge of the Holocaust has turned up a finding that suggests there are some in this country who believe Canada shouldn’t intervene militarily if there was a genocide taking place in the world.

The poll commissioned by the Association for Canadian Studies found that 29 per cent of respondents disagreed with the idea that Canada should send troops to a place where a genocide was occurring.

READ MORE: ‘Signs along the road to Auschwitz’: a Holocaust survivor’s story

A further 11 per cent preferred not to answer the question, which the association’s president suggests could mean even more people disagree with the idea, but did not want to be counted as being opposed.

The online survey of 2,295 Canadians by Leger Marketing was conducted the week of Nov. 11, 2019 and cannot be assigned a margin of error because, according to the polling industry’s generally accepted standards, internet-based polls are not considered random samples. 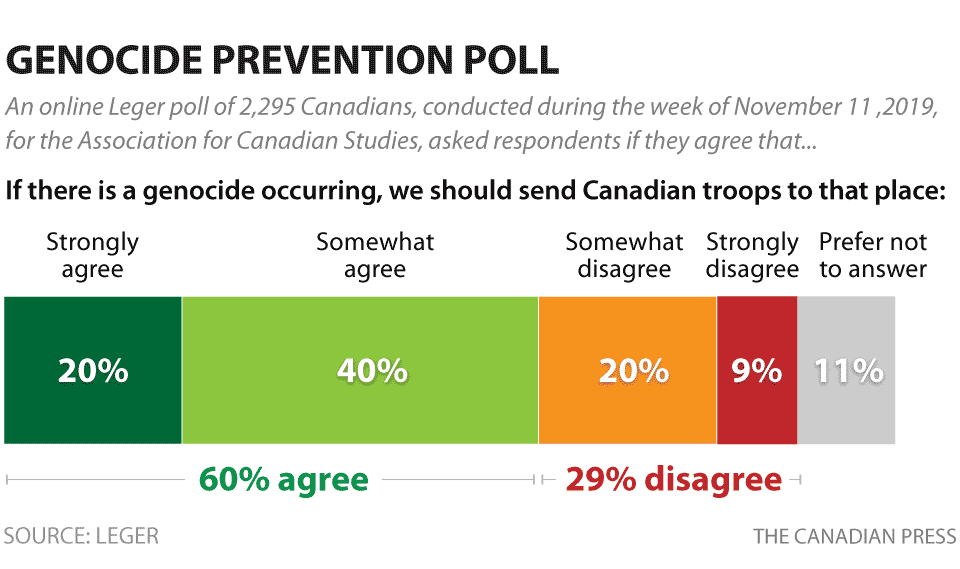 The findings are being released as global leaders prepare to mark the 75th anniversary of the liberation of Auschwitz, a Nazi death camp during the Second World War.

Gov. Gen. Julie Payette will be among those attending the commemoration on Jan. 27, the date in 1945 when Soviet troops liberated the camp. The Auschwitz Memorial Site and Museum says some 120 survivors, including some from Canada, are expected to make the trip for events.

Canadians by and large understand the concept of genocide, so opposition to military intervention stems less from ignorance and more from a belief that it’s not our business, said Jack Jedwab, president of the Association for Canadian Studies.

“All this is very unfortunate because the lessons of what transpired 75 years ago — as we’re on the verge of marking the liberation of Auschwitz — the lesson is that those people were victims of the most horrific crime of the 20th century because there were lots of bystanders.”

Auschwitz-Birkenau, built by Nazi Germany when it occupied Poland, was the largest of the extermination centres the Nazis built during the Second World War. Some 1.1 million people, the vast majority of them Jews, were killed there.

About six million Jews were killed during the Second World War, a figure that respondents in the association’s survey identified 43 per cent of the time.

Ahead of next week’s commemoration, the International Court of Justice will issue a decision Thursday over whether it will order a halt to a campaign in Myanmar against the country’s Rohingya Muslim minority.

In anticipation of the decision, a report on Monday by a Myanmar government commission said there was no evidence of genocide. But it said there are reasons to believe security forces committed war crimes in counterinsurgency operations that more than 700,000 Rohingya Muslims to flee to neighbouring Bangladesh.

In September 2018, the House of Commons unanimously supported a motion calling the crimes against the Rohingya people a genocide.

The survey results suggested that those who disagreed with military intervention to stop a mass slaughter were more likely to show anti-immigrant sentiment and a higher distrust of Jews.

Jedwab said that may stem from a belief that situations elsewhere are viewed as conflicts between different groups of ethnic people, with whom we don’t feel a connection.

“There are a number of people who say that these situations are not our business,” he said.

“It’s a function of people who don’t think that those issues are matters we should deal with — that they’re not our problem.”

The youngest respondents in the survey, ages 18 to 24, were the least likely to disagree with sending troops should a similar situation take place again. They too also most often preferred not to answer the question.

Those aged 45 to 54, members of so-called Gen X, were the most likely to disagree with sending troops.

— With files from the Associated Press