A wind warning has been issued by Environment Canada for the Fraser Valley, Southeast Metro Vancouver, including Surrey and Langley, Greater Victoria, Howe Sound and the Southern Gulf Islands.

Strong outflow winds developed overnight and could last through much of Wednesday.

The winds have been measured in the 50 to 70 km/h range but some areas could experience gusts up to 90 km/h.

In North Vancouver on this windy Wednesday morning. About 18,000 without power after winds brought trees down on power lines. This is Violet Street. Neighbors say the damage on their street happened at around 3am. @GlobalBC pic.twitter.com/y3APvtZcmM

READ MORE: B.C. weather outlook: get ready for a taste of winter

The winds toppled trees, and knocked out power to thousands, mostly on the North Shore.

Early Wednesday afternoon, TransLink said it had suspended SkyTrain Millennium Line trains between Burquitlam Station and Coquitlam Station due to a tree fallen on the tracks.

At the peak of the outage, BC Hydro said around 18,000 customers were in the dark.

Early Wednesday evening, BC Hydro said approximately 3,500 customers in the Lower Mainland and Sunshine Coast were still without power.

School District 44 said the power outages resulted in a late, 11 a.m. start time for a number of schools in North Vancouver.

“We do have a lot of transmission outages, large customer outages. We are working on getting those back as soon as possible,” said BC Hydro spokesperson Tanya Fish.

“We are aiming to have largely those outages back by about 9 a.m. this morning.” 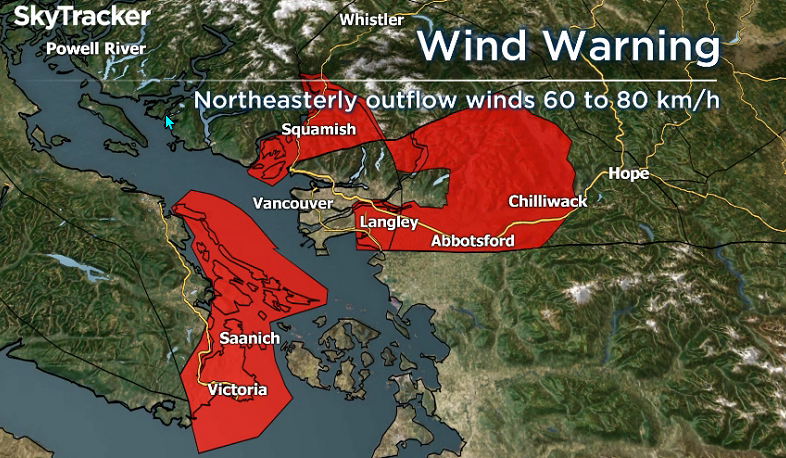 The intense outflow winds will be caused by the combination of an Arctic ridge of high pressure in the B.C. Interior and a low pressure centre sitting south of the border.

Air is forced from high to pressure from the interior out to the coast. As the air gets funneled through the valleys it can pick up speed.

Send your weather photos to weatherwindow@globaltv.com or to @KGordonGlobalBC on Twitter.