Snowfall warning ended for Calgary after blast of wintry weather

A snowfall warning was ended for Calgary on Tuesday evening after the region was blasted with wintry weather that started Monday night.

Environment Canada had said snowfall amounts would be “highly variable,” but the city was forecasted to see about 10 centimetres. Officials advised areas at higher elevations could see upwards of 25 centimetres by the time the snow ended on Tuesday evening.

Good morning!! It'll be a blustery Tuesday so bundle up and pack your patience. Strong winds will reduce visibility and make it feel much colder. #YYC #Alberta #ABstorm pic.twitter.com/6tJsmh0FTt

“Surfaces such as highways, roads, walkways and parking lots may become difficult to navigate due to accumulating snow,” Environment Canada stated.

The snowfall is due to a southward moving cold front and Global News meteorologist Tiffany Lizée said snow won’t be the city’s only challenge on Tuesday.

She said skies will clear overnight into Wednesday, with temperatures expected to climb near double digits as into the Thanksgiving long weekend.

Chris McGeachy with the City of Calgary said crews worked throughout the night, applying salt to the roads to help melt snow and prevent ice from building up.

Geachy says they’re still within that budget for 2019, with just under $15 million remaining until the end of the year.

Speaking with Global Calgary on Tuesday morning, McGeachy said although roads are in fairly good condition, they are encouraging Calgarians to drive for winter conditions.

“Our crews are … Working 24/7 and we do expect our plowing operations will intensify through the day as the snow becomes heavier,” McGeachy said.

“The roads seem pretty good but there could be icy spots on bridge decks, on-off ramps and at intersections.”

As part of the city’s seven-day snow and ice control plan, crews start to plow, salt and sand so-called Priority 1 routes (roads with traffic volumes exceeding 20,000 a day) such as Crowchild Trail and Macleod Trail once the snow has stopped falling.

Once Priority 1 routes are completed, crews focus on Priority 2 routes (roads which carry 5,000 to 19,999 vehicles a day) like Kensington Road and Acadia Drive.

Crews then turn to clearing Priority 3 and 4 routes, which includes residential areas, school and playground zones.

However, if snow falls, the process then begins again at the beginning. 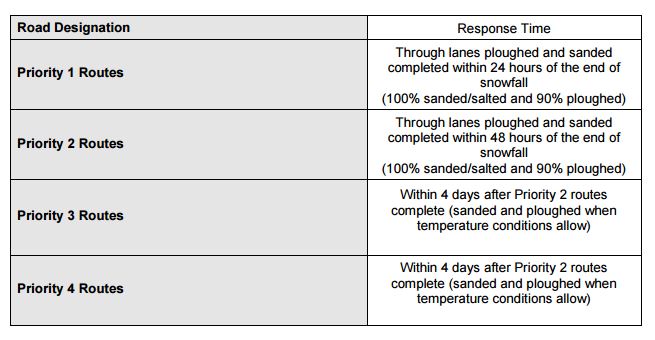 The City of Calgary said on Tuesday it does not anticipate calling a Snow Route Parking Ban.

Between 8 a.m. and 11 a.m. on Tuesday, Calgary police said 93 crashes were reported including six with injuries.

Give yourself extra time to get anywhere today! Roads are wet right now and conditions will likely get icy and slushy as temperatures continue to drop.#ABstorm #ABroads #YYC #YQL #Alberta pic.twitter.com/yFAforTtCs