NDP Leader Jagmeet Singh says his party’s relative lack of candidates for October’s federal election is due to his focus on recruiting more diverse voices into politics, including women and minorities.

Singh, who was officially acclaimed as the party’s candidate for Burnaby South on Friday, is joining 147 other NDP incumbents and hopefuls looking to earn seats in Parliament.

But that number pales in comparison to both the Conservatives and the People’s Party of Canada, who are both close to naming candidates in each of Canada’s 338 ridings.

The Green Party and the Liberals are also well ahead, at 274 and 273 candidates respectively, as of Thursday. 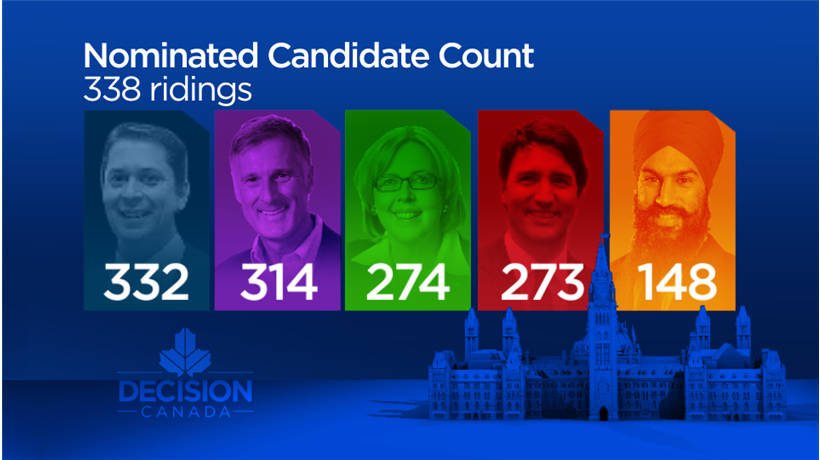 Singh said he’s not worried, despite having difficulty attracting the kinds of candidates he wants, particularly women.

“It’s a lot harder to recruit many women, who are so qualified and so capable but don’t see themselves as leaders and they won’t say yes on the first try,” he said.

“It takes multiple attempts to encourage women to come forward, because there’s such a tradition of men being in politics. It takes work to change the status quo.

“We’re working hard, and we’re going to have all 338 ridings filled with New Democrats. People can confidently be able to vote for us in any and every riding across Canada.”

Singh said his efforts are paying off: more than half of his candidates are women, while eight per cent are Indigenous. Several other candidates identify as LGBTQ2, and several other minorities are represented.

But with days to go before the official campaign begins — the earliest that Prime Minister Justin Trudeau can drop the writ is Sept. 1, and no later than Sept. 15 — the New Democrats face significant shortfalls.

As of Thursday, the party had not named a single candidate in Prince Edward Island, Nunavut, the Northwest Territories or New Brunswick. In the case of the latter two, they’re the only party with a blank slate. 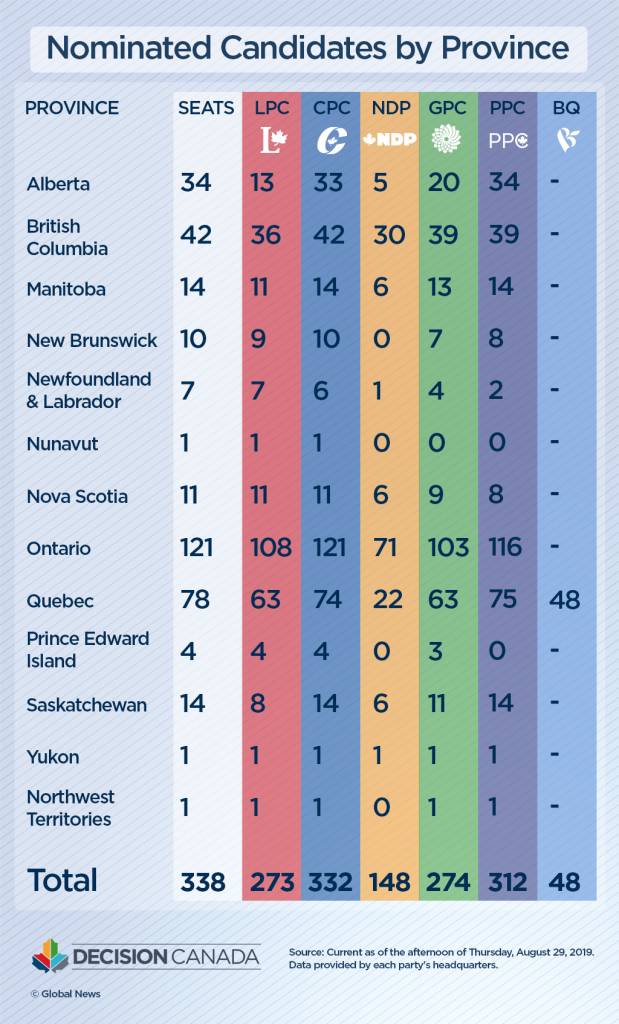 The party is also facing a near-record percentage of retirements this year. Just over 33 per cent of New Democrat MPs who were elected in 2015 chose not to run again.

While Singh said he feels the urgency to fill those empty candidacies, he said he wants to make sure NDP voters are represented.

The latest Ipsos poll conducted exclusively for Global News found the NDP floundering in third place among decided voters, at 18 per cent.

The poll also found that just 13 per cent of those surveyed thought Singh was the best choice to become the next prime minister — less than Justin Trudeau, Conservative Leader Andrew Scheer and Green Party Leader Elizabeth May.

Stewart embraced Trudeau as they met at City Hall earlier Friday to discuss housing and the city’s opioid crisis, despite the mayor’s criticisms of the prime minister while in Ottawa.

Neither Horgan nor Stewart appeared at Singh’s event Friday, but the party leader said he didn’t give it much thought.

“What Mr. Trudeau does very well is, right before an election, he starts making announcements and promises,” he said. “We saw that same tune in 2015, and we saw what happened afterwards.

“When it comes to it, he had four years in power. Did he deliver on those commitments, or did he break them? I’m sure Canadians will realize, or look at the track record and see that Mr. Trudeau didn’t follow through on those.”

—With files from David Akin