The city is reviewing of all its public courses to weigh how much each one costs to maintain while also exploring any opportunities to sell, redevelop or decommission the land.

Land assessments are also being done to determine if redeveloping the land could save tax dollars.

“Bring in that real estate lens, looking at the encumbrances, what are some planning potentials, market value,” said Greg Steinraths, the City of Calgary’s golf and sport development manager.

“It could be a repositioning of the golf courses, sale of land that we’re not using, anything so we’re going to look at it through a bunch of different filters.”

In November 2018, at the One Calgary budget discussions, council directed administration to prepare a plan for a real estate and development assessment for the remaining golf amenities to sustain the overall operations of public golf courses in Calgary. On Monday, administration presented its plan.

There are a total of 99 holes between six public golf courses in Calgary. In 2017, Maple Ridge, Confederation, Lakeview, Richmond Green, McCall Lake all suffered loses, but Shaganappi Point profited and consistently has for the last few years, according to the report.

However, McCall Lake Golf Course isn’t a location the city is focused on redeveloping at this time, since $6.7 million in renovations were recently completed.

Ideally, the city says they want the taxpayer support for public courses to be at zero. 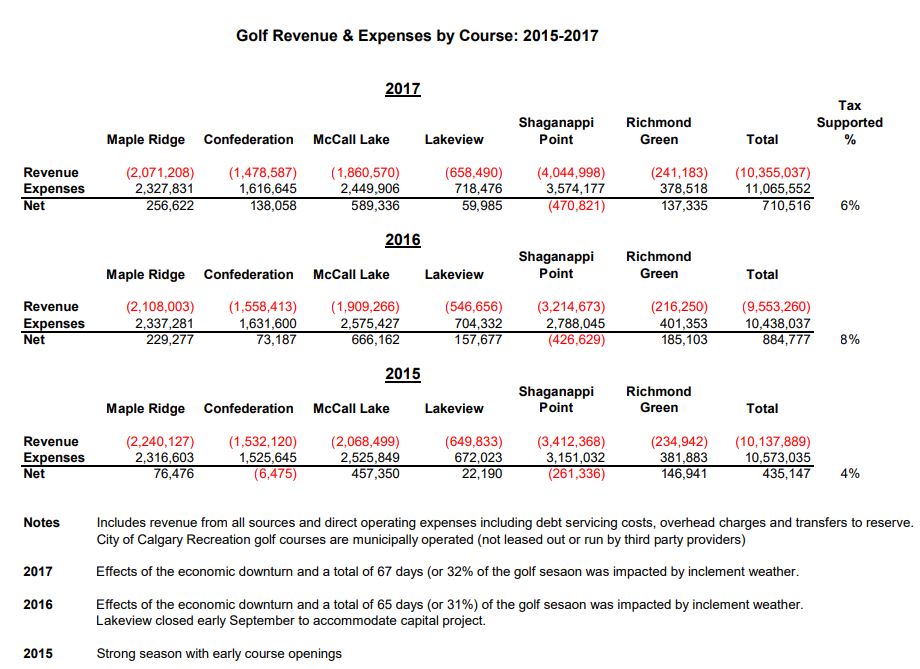 Coun. Joe Magliocca wants the city to get out of the golf business altogether. He thinks city-owned courses should stay public but be operated by private companies.

“We’ve been bleeding millions of millions of dollars on our golf courses… we’re usually in the hole,” Magliocca said.

Mayor Naheed Nenshi said whatever decision is made on the future of public courses in Calgary, it will be “done responsibly.”

The closure of a city-owned course is a possibility, especially for courses that never break even, according to council.

The report on maintenance costs for city courses is expected in July or September, while the land assessment should be complete by early next year, according to Coun. Ward Sutherland.