It was a shocking display of vandalism outside a Winnipeg Ukrainian Catholic Church.

The head of a statue at the Sts. Vladimir and Olga Cathedral on McGregor Street was removed, along with part of the cross it was holding.

The statue is of St. Volodymyr, who was the first Ukrainian Christian Catholic Prince and is considered a hero in the country.

“(We’re) extremely disappointed that the people who did this would attack a statue on a church property and literally destroy it,” Pastor Michael Buyachok said.

Buyachok said it happened Tuesday and talked to neighbours who noticed people hanging around the statue in the days leading up to the disappearance of the head and cross.

It was designed by renowned Winnipeg artist Leo Mol in 1984 and was even blessed by Pope John Paul II when he visited Manitoba.

He speculates the pieces were taken to be sold as scrap metal. 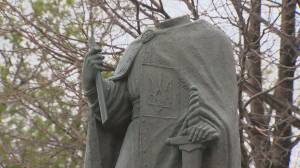 ‘We notified all the places where these kids would go and get money for it, but nobody has said anything and it has not been found,” Buyachok said.

Buyachok said an annual service was held at the statue each July. He said this is the first vandalism of any kind towards the statue.

“It’s a tremendous loss to us. It’s a beautiful statue.”

He says if the head is not found and returned, the statue will have to be taken down.

Global News has reached out to Winnipeg police for comment.