The unemployment rate stayed at its 43-year low of 5.6 per cent last month as the economy closed out 2018 with the addition of 9,300 net new jobs, Statistics Canada said Friday.

For the second straight month, the jobless rate was at its lowest level since Statistics Canada started measuring comparable data in January 1976. Economists had expected the addition of 5,500 jobs and an unemployment rate of 5.7 per cent, according to Thomson Reuters Eikon. 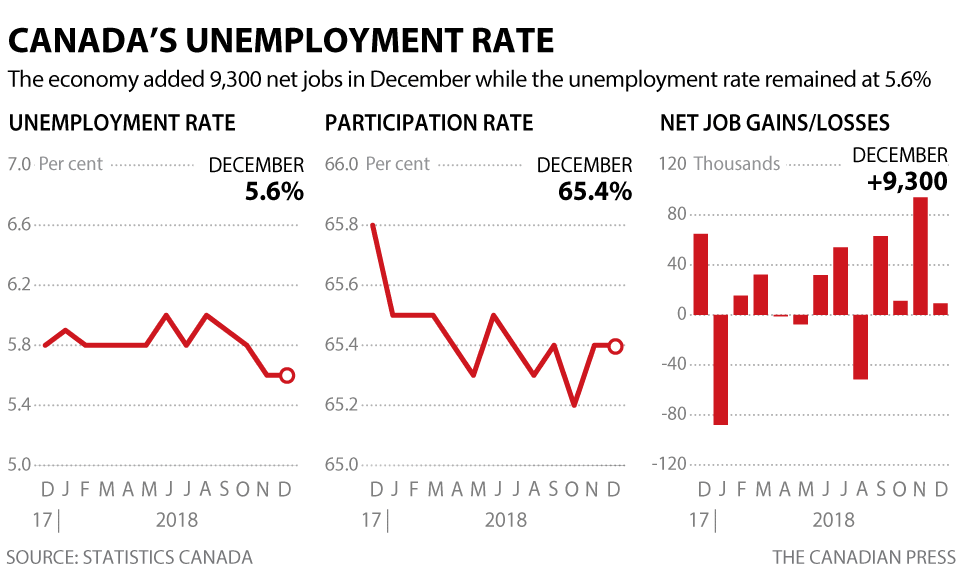 But even in a tightened job market the latest labour force survey shows wage growth delivered another weak reading in December of 1.49 per cent — which is well below inflation. Year-over-year average hourly wage growth for permanent employees was 1.46 per cent in November – and it has decelerated steadily since its May peak of 3.9 per cent.

READ MORE: The $100K entry-level job you can get here in Canada

Economists highlighted other less-than-stellar details from the December report.

“There were a few flies in the ointment,” CIBC economist Royce Mendes wrote in a note to clients. “All of the job creation … came from the part-time sector, with full-time job employment declining 19,0000.”

Besides, net employment among salaried workers fell by 37,000 during the month, with all the gains coming from self-employment, Mendes noted.

WATCH: What does the economy have in store for 2019?

The December result follows a gain of 94,100 net jobs in November, the country’s largest monthly increase since March 2012.

In the jobs report Friday, the overall employment gain of 9,300 for December was deemed too low by Statistics Canada to be statistically significant.

But a closer look revealed some important changes.

Alberta, which has been hit hard by a drop in oil prices, saw a net decrease last month of 16,900 jobs or 0.7 per cent, compared with November, as an increase in part-time work was far outweighed by a loss of 36,200 full-time positions.

Looking back at 2018, Statistics Canada says the country gained 163,300 net new jobs for an increase of 0.9 per cent, which was a slower pace of growth compared with 2.3 per cent in 2017 and 1.2 per cent in 2016. Employment growth in 2018 was mostly concentrated in the services sectors, which generated 151,000 positions compared with an increase of just 12,300 in goods-producing industries.

The report Friday was the first major economic data release of 2019.

The Bank of Canada has been monitoring wage growth ahead of its interest-rate decisions as it tries to determine how well indebted households can absorb higher borrowing costs.

The central bank, which will make a rate announcement next Wednesday, has raised its benchmark rate five times since the summer of 2017 in response to Canada’s strong economic performance. Governor Stephen Poloz has signalled that more increases will be needed to prevent inflation from rising too high.