River Heights residents are expressing frustration that a local pleasure skating rink wasn’t re-opened this winter and they weren’t notified about it.

Brenda Still told Global News that the rink at Montrose Park was an annual institution for more than 40 years – until now.

“I noticed that the process of building the rink wasn’t starting, so I sent an email to our city councillor, and it was then I found out that the rink wasn’t going to be going in,” said Still.

“None of us knew anything about it. Everybody was busy with getting ready for Christmas, hockey season is in full throttle … so the community really had no means of responding to the change in process.” 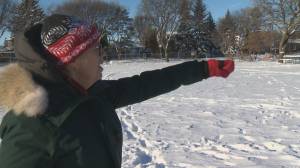 Brenda Still shows where the Montrose pleasure rink used to be.

READ MORE: Winnipeg hockey fans lace up to skate at Bell MTS Place, home of the Jets and the Moose

According to the City of Winnipeg’s Parks and Open Space manager Dave Domke, the pleasure skating rinks in city parks are assessed each year based on usage.

“The council-approved number of pleasure rinks that we have is around 40 rinks, and we determine whether they’re well-used or not,” he said. “The Montrose rink, compared to other rinks, was not well-used.

Domke says they determine this based on the number of skate marks on each rink.

“There are plenty of other opportunities for skating in other areas of the city, including rinks that are in close proximity. You’ll find with some of the community clubs, that they’ll offer pleasure skating rinks.”

Darren Thomas has lived in the Montrose area for 40 years, with the rink always there. He’s disappointed in the lack of communication.

“If you knew the Montrose rink was on the chopping block, maybe you should have coordinated with someone in the area and say after 40 plus years, you’re not going to have a pleasure rink or ice rink,” said Thomas.

Domke said the city also offers an Adopt-a-Rink program, in which local residents can apply to install and maintain a volunteer-driven community rink, with the expertise of parks staff. Applications can be made before each skating season begins.

But Still said they didn’t know about losing their rink until the skating season was well underway.

“If the city knew we were going to lose rinks, they could have notified us much earlier so we could have been proactive,” Still said.

The city looks after 39 pleasure rinks at the moment, but are trying to get down to 36, a number city council approved several years ago. A pleasure rink takes $12,000-$15,000 to maintain, according to the city.

WATCH: Helmets not mandatory on outdoor rinks around Winnipeg — should they be?