Former Big Brother star Christmas Abbott was arrested in Tampa, Fla., on Tuesday, according to online records from the Tampa Police Department.

Abbott, 36, was charged with felony criminal mischief stemming from an argument she got into with her ex-boyfriend Benjamin Bunn’s new girlfriend, Samantha Morse, outside a Tampa gym in August.

Things escalated quickly, according to a police report obtained by Us Magazine, after Abbott “threw a coffee cup” and rammed “the victim’s vehicle twice” with her Mercedes-Benz SUV, causing more than $5,000 in damage to Morse’s car.

The reality TV star was reportedly eight months’ pregnant with Bunn’s child at the time of the incident.

Because of the pregnancy, police declined to process her and seized her vehicle instead. She was ordered to turn herself in later.

According to the records, Abbott never occupied a jail cell and was released later Tuesday afternoon.

READ MORE: ‘Big Brother Canada’ Season 7: How to apply from coast to coast

Happy two weeks my not so lil, lil man #loyalatticus 💙 It’s been a RIDE! You’ve grown so much, it seems like I can literally see you grow when I watch you sleep. It’s been challenging but so dang worth it. Every minute with you is a pure slice of heaven 🙌 I know I have made mistakes in my past but you are greater than the sum of all of my successes combine in my lifetime. You are my heart and joy in life and I can only try my best to give you all I am capable of. #pressureisaprivilege #happy2weeks #loyalabbott #growingsofast #badassmomma #mybest

“This incident was during a very stressful and difficult time amplified by unexpected challenges and pregnancy,” Abbott’s rep shared with E! News. “Christmas is being proactive in her responsibility to getting this matter resolved and moving forward with her life. She is and has been, solely focused on time with her son and recovering from a difficult pregnancy and delivery.”

Abbott made it to the final three in Big Brother‘s 19th season in 2017, took to Instagram on Wednesday night to say that she will share her side of the story when she is ready.

“There are lies & truth to every story & I’ll share mine when I’m ready,” she wrote.

Abbott continued: “Until then, I am being proactive with taking care of my responsibilities to have this matter resolved. I’m focused on providing for Loyal & recovering from a very emotionally challenging pregnancy & difficult delivery. Being a single mother is challenging enough without the world having an opinion on a situation they know nothing about.” 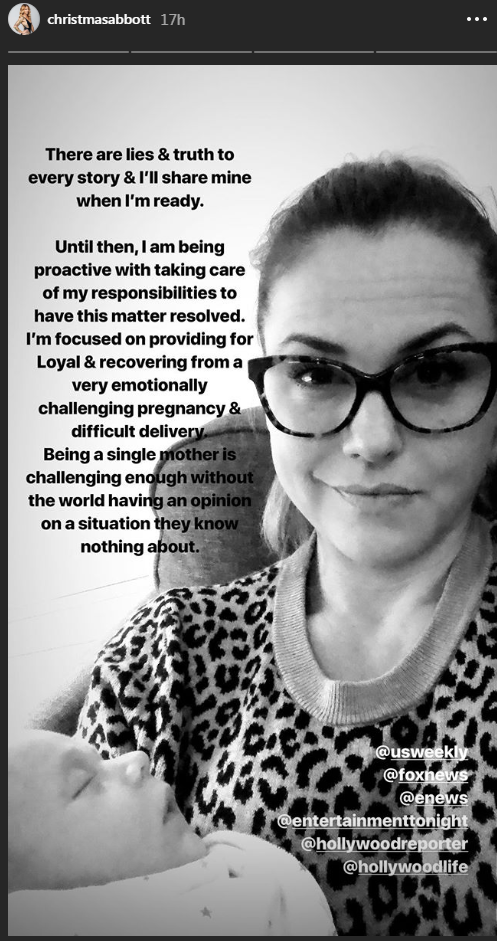