Former Melrose Place star Heather Locklear was arrested again on Sunday night for an incident where she allegedly punched a police officer and kicked an emergency medical technician at her southern California home.

Police were called to Locklear’s house after she got into an argument with friends and family there, said a spokesperson with the Ventura County Sheriff’s Office.

Authorities reported that she appeared to be “heavily intoxicated” at the time of arrest, and she punched a police officer who attempted to intervene. (According to police, the officer didn’t sustain any injuries.) 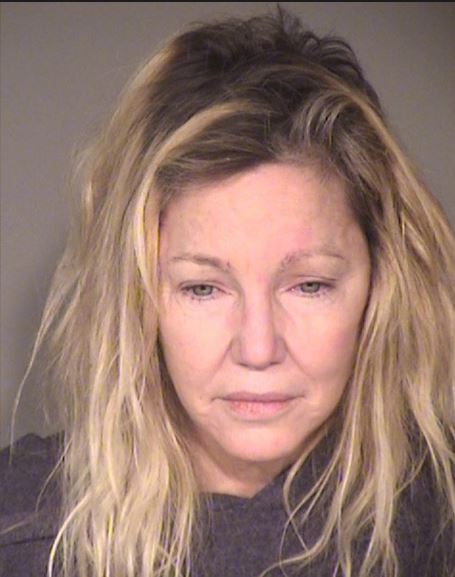 An ambulance was called for Locklear — police were concerned for her well-being — and as she was being put onto a gurney, she reportedly kicked an EMT in the chest. After being checked out of the hospital, she was taken to jail.

Locklear, 56, was arrested and charged with battery of a police officer and emergency personnel, and remains in police custody. She is being held on $20,000 bail.

The arrest comes four months after Locklear was involved in an eerily similar situation; at the time, she was booked on suspicion of domestic violence, as well as three counts of battery on emergency personnel, following an incident at her home where police said she kicked and pushed officers who had responded to the scene of a domestic dispute.

Locklear pleaded not guilty to the charges in April but she was barred from owning or possessing a firearm.

Locklear has had other run-ins with law enforcement: she was arrested in 2008 for suspicion of driving under the influence, and in 2012, she and her ex-fiancé, fellow actor Jack Wagner, were ordered to appear in court after they had an allegedly violent altercation. Neither wanted to press charges against the other and the case wasn’t pursued any further.

A week ago, reports emerged that Locklear was undergoing psychiatric evaluation after a family member allegedly told police that she was suicidal.

She is scheduled to appear in court on Tuesday afternoon.

— With files from the Associated Press