Look out, the Canadian music industry wants us to pay more for our electronics: Alan Cross

The music industry has always been freaked out by piracy and the loss of revenue that comes with people stealing music.

If you’re of a certain vintage, you may remember the hysteria manifested in the Home Taping is Killing Music campaign launched in the U.K. in 1981 that came complete with a half-million-dollar TV ad campaign. The industry blamed weak sales on people who were wantonly recording albums onto blank cassettes and making mixtapes for the car or this new thing called the Sony Walkman. It even came with a cute punky logo. 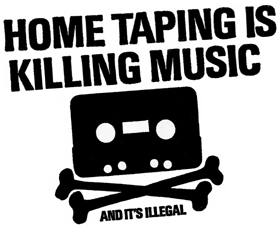 Both artists and executives tried to convince the public that if we wanted music on cassette, then we’d better bloody well go out and buy a legal copy from the record shop. Even making a copy for personal use was portrayed as evil and immoral.

A decade later, pressure from the industry killed consumer use of Digital Audio Tape and the Digital Compact Cassette, two technologies that allowed for perfect duplication of copyrighted material. A copy protection scheme called the Serial Copy Management System was created especially to hobble the abilities of the new machines.

Meanwhile, the full-court press against the old-school cassette continued. In 1997, “private copying” was added to the Canadian Copyright Act, allowing for a levy to be assessed against blank cassettes and hidden by the manufacturer or importer in the retail cost of the tape. The idea was for this money to be redistributed to artists as compensation for music that was illegally copied and thus deprived artists of sales income. Within two years, Canadians were paying 23 cents on each blank cassette and 60 cents on each MiniDisc.

Canadians also ended up paying exponentially more for a spindle of blank CDs than our friends in America, thanks to a per-disc levy of 29 cents. Multiply that by 25, 50 or 100 discs on a spindle, and things quickly got expensive. Future Shop (remember them?) had packages of 50 on the shelf for more than $30, while I remember seeing U.S. retailers selling the exact same package for less than US$10.

It also didn’t matter that you might be using cassettes, MiniDiscs and CD-Rs for non-musical, non-piracy purposes, such as audio books, books for the blind and data backups. Everyone paid the levy regardless of the end use.

By the time we got to the late 2000s, the landscape had changed dramatically. We’d moved beyond copying music to cassette or burning music to CDs, and the talk turned to “digital audio recorders,” devices like iPods, mobile phones, MP3 players, computer hard drives — anything that could store music in digital form. This became known as the “iPod tax,” which asked for a tariff placed on MP3 players and other devices capable of storing music.

The government actually began collecting these tariffs — the Copyright Board assessed as much as $25 on an iPod with a capacity more than 15 GB with an increased ask of up to $75 per iPod in 2007 — but ultimately had to repay $27 million when it was ruled copyright laws governing computer equipment made no provision for such fees. The iPod tax was declared dead and buried.

Once again, though, the concept of levies on digital devices has risen zombie-like to fight another day.

A House of Commons committee starts hearings this week on a review of Canadian copyright law. A group called the Canadian Music Policy Coalition, which represents 17 music associations, is circulating a document containing concepts it would like to see enacted. The 30-page report entitled Sounding Like a Broken Record: Principled Copyright Recommendations asks for the following:

(a) New levies on consumer devices like smartphones and tablets, a request far beyond the old iPod tax. How much? That’s yet to be determined.

(b) A requirement that Internet service providers keep an eye on what content we’re consuming and, if necessary, to police its use. That means monitoring usage, using “content recognition technologies,” blocking content and then reporting back to the music industry (“Provide feedback to the intellectual property community.”)

(c) Asking that the industry have the ability to cancel agreements with Internet companies if the benefits of those companies become “disproportionate” — whatever that means.

(d) An extension of the term of copyright. The group wants intellectual property protected for the life of the creator(s) plus an additional 50 years. (This is when it would be good idea to read up on how Mickey Mouse has been changing copyright terms for years.)

You can’t fault the industry for trying to protect its intellectual property, for pushing for more revenues and for trying to achieve copyright protections it sees in other territories. That’s the whole purpose of a lobby group like this. But it’s also worth noting that the Canadian music industry hasn’t been in this good a shape for years.

SOCAN, the Canadian performing rights collection, has been reporting record revenues for its membership. The rise of streaming music services, like Spotify, has cut piracy through file-sharing drastically. Same thing with the amount of BitTorrent traffic. There are tough anti-piracy measures already in the works. And we don’t “stream rip” music nearly as most other countries.

I know copyright law can be dry and dull, but if we don’t keep tabs on things, music consumers could end up paying more for the things we take for granted.

Alan Cross is a broadcaster with 102.1 the Edge and a commentator for Global News.