Lana Del Rey claims that alt-rock band Radiohead has sued her over some unfortunate similarities between their popular ’90s rock tune Creep and her song Get Free from her 2017 album, Lust for Life. (Ignore the impulse to shout out “Iggy Pop used that title for an album in 1977!” Album and song titles are not subject to copyright and trademarks.)

At first blush, this looks like a run-of-the-mill “you-ripped-off-my-song” situation. But if we unpack things all the way, we find that there’s an unusual wrinkle.

Let’s start by comparing the two songs, beginning with Creep, which was released in 1992 on Radiohead’s Pablo Honey album.

Now here’s Lana’s Get Free. Give it a listen.

Del Rey took to Twitter to explain the situation.

It’s true about the lawsuit. Although I know my song wasn’t inspired by Creep, Radiohead feel it was and want 100% of the publishing – I offered up to 40 over the last few months but they will only accept 100. Their lawyers have been relentless, so we will deal with it in court.

Talk about playing hardball. But this is where we run into the aforementioned wrinkle. Back in the ’90s, Radiohead itself was sued for plagiarism. The song in question? Creep.

Shortly after the song was released, songwriters Albert Hammond and Mike Hazelwood couldn’t help but notice that Creep had a lot in common with The Hollies’ The Air That I Breathe.

Hammond (who, by the way, is the father of The Strokes’ Albert Hammond Jr.) and Hazelwood took the matter to court and won, securing a partial songwriting credit. Which is why the Wikipedia entry for Creep looks like this: 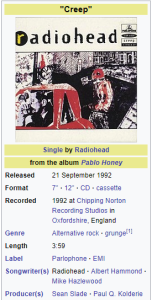 The bottom line is that Radiohead is suing Lana Del Rey for plagiarism over a song that they themselves were found to have plagiarized, at least partially.

It’s not enough for one song to remind you of another because of a series of sonic similarities. As Dahl points out, there’s a rigorous legal test for plagiarism that must be applied by the prosecution. These rat holes run deep, as Dahl points out:

“The common thread between the three songs is the final chord in the progressions, which happens to be a minor chord. It gives all three songs a darker feel at the conclusion of the chord progression. This is called a ‘minor fourth,’ and it creates a hook because it doesn’t technically fit the key of the piece. It stands out and makes the progression memorable. It is sort of the reverse of what Leonard Cohen famously referred to as: ‘the minor fall and major lift.'”

Dahl concludes that the melody in the verses is very similar but that the choruses are completely different. However, because of the way Del Rey phrases things throughout the verses, he thinks there’s a case. A limited one, but still enough to warrant some songwriting credit to Radiohead.

“If Lana Del Ray did in fact offer 40 per cent,” writes Dahl, “I think Radiohead should have taken it, especially in light of their song’s plagiarism history.”

This is what it’s come to: plagiarism suits over songs filed by the writers of a song who themselves have been determined to have plagiarized someone else for that song. (Boy, that’s an awkward sentence.)

Meanwhile, there have been some mixed messages regarding what sort of legal action might take place. Warner/Chappell, Radiohead’s publisher, issued a statement last night (Jan. 9) that they were not pursuing any claims, although they did admit to having “been in discussions since August of last year with Lana Del Rey’s representatives.”

The statement went on to say “It’s clear that the verses of Get Free use musical elements found in the verses of Creep and we’ve requested that this be acknowledged in favour of all writers of Creep.” Despite that, though, no lawsuit has been filed and Radiohead is not asking for 100 per cent of the publishing.

We’ll have to watch this one very closely. Like the never-ending lawsuits over Bruno Mars/Mark Ronson’s Uptown Funk, this could have long-term legal implications for songwriting, publishing, copyright and creativity.

Are we running out of songs? Hey, there are only so many notes in the Western musical scale and there’s a finite number of ways they can make pleasing combinations.

If lawyers have their way, we might be heading down a dark, stifling path.

Alan Cross is a broadcaster with 102.1 the Edge and a commentator for Global News.