Halifax Regional Police are investigating a report of a sexual assault on the campus of Mount Saint Vincent University.

According to police, the report was received at 4:24 a.m. on Friday.

A campus-wide bulletin was sent out to students just before 9 a.m. from Brian Jessop, the vice-president of administration.

“I am writing to advise that there was an incident on campus overnight. We are working with police to investigate the situation,” the statement read. “Please note that there is no risk to others.”

Police are bagging evidence at the scene. We have seen them remove a number of items including a water bottle and a bra @globalhalifax pic.twitter.com/8JtHf3OXCA

The university remained open Friday morning, as officers taped off a large wooded area near the Rosaria Student Centre.

The forensics unit was on scene collecting evidence, and an officer could be seen using a metal detector.

Officers were also at a residence building, which is located a short distance from the taped-off scene.

“We take this incident very seriously”

In an interview with Global News, Jessop says the university has had a sexual assault policy since 2015 and a strong focus on safety on campus.

“We do review our campus on a regular basis, certainly for lighting, safety, security. We look for hazards on campus,” Jessop said.

“We have a full-time security presence on campus, very close to that location on Seton Road. We have 24-hour security, we provide support to students and/or staff who are getting off the bus late in the evening. We drive them up to residence or a campus building.”

Jessop adds he knows there is always room for improvements and the university would take feedback to see if there is anything they can do better.

Some students on campus say the incident is alarming, and more security might be necessary.

“It makes me a little bit more uncomfortable to walk that alone, especially at night because you don’t know what could happen,” said Courtney Chambers, a first-year student.

The university issued a statement later in the morning on their website and included contact information for students who wanted to speak to someone about the incident.

“We realize that this incident may be distressing to members of the Mount community,” the statement reads. 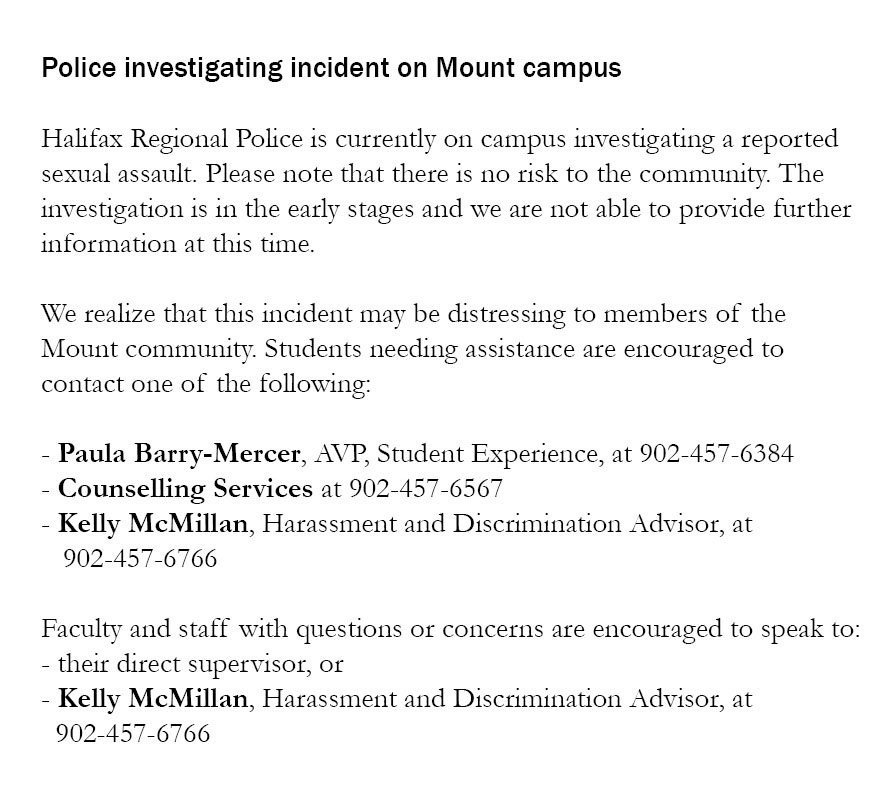