The majority of Calgarians support a Calgary bid for the winter Olympic Games in 2026, according to a new poll.

The Mainstreet/Postmedia poll, released on Tuesday, suggests 61 per cent of eligible voters would like to see Calgary make a bid. 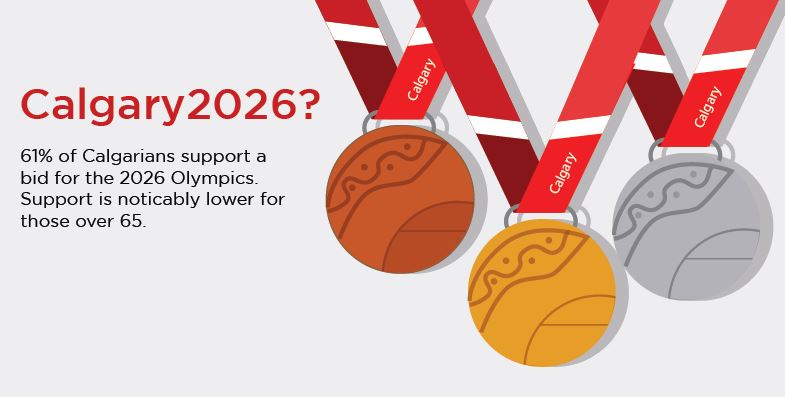 “These are solid numbers,” Mainstreet Research president Quinto Maggai said in a news release. “Support is consistent among gender lines and age demographics, though seniors are the least likely to support bidding for the games (at only 55 per cent support).”

“Whether Calgary will be successful in bidding for the games remains to be seen, for now, many Calgarians are on board.”

When asked why they supported a winter Olympic bid for Calgary, most people (64 per cent) said it was due to civic pride. A further 18 per cent cited the entertainment value, while another 11 per cent supported the bid believing it will be good for the economy.

Those who opposed the idea of an Olympic bid were primarily concerned with the cost of hosting the Games (64 per cent) or were generally not interested in the Olympics (23 per cent).

Winsport president and CEO Barry Heck said their recent economic impact study showed that the facilities built because of the 1988 Olympics games in Calgary has helped Winsport generate around $120 million a year for the city.

Story continues below advertisement
“That model has proven very successful,” Heck said. “The challenge we face now is that model was never designed to replenish capital. We have some challenges due to the fact that the original assets are end of life. [For example] our day lodge, the track.”

Mayor Naheed Nenshi agrees there is a need to look at the city’s Olympic facilities “that are soon to be 40 years old, and figure out a way to keep them going.”

“Is the Olympics a good way of getting that needed infrastructure in those facilities?” Nenshi said.

But re-building the Olympic dream will involve more than just a promise to keep training world class athletes. Nenshi said it has to be honest, transparent and cheap.

“If we can’t figure out a way to do those things, then I’m sure council will agree not to proceed with the bid,” Nenshi said.

The poll from Mainstreet Research surveyed 831 Calgarians via landlines and cellphones on March 10 and was released on March 21, 2017. Respondents were screened to confirm they were eligible voters.

According to Mainstreet, the poll carries a margin of error of ± 3.4 percentage points, 19 times out of 20.

More information about the Calgary Bid Exploration Committee can be found at Calgary.ca/Calgary2026.