One man died on Wednesday in a series of strong earthquakes which hit central Italy, a region devastated by deadly tremors last year, while heavy snow raised fears for the safety of others in the region.

Four quakes of magnitude 5.2 and higher struck near the hill town of Amatrice, some 100 km (60 miles) northeast of Rome, in the space of four hours. Much of the area had already been abandoned after last year’s earthquakes.

The central Lazio, Marche and Abruzzo regions have been grappling with heavy snow, and one man aged about 82 died after the snow and one of the tremors made the roof of a farm building fall on him, a fire service spokesman said.

READ MORE: Over 22,000 people living in shelters after Italy earthquakes

A hotel in Abruzzo was hit by an avalanche and local media reported three people were feared missing. There were 20 people plus staff at the hotel, regional president Luciano D’Alfonso wrote on Facebook.

Twenty firemen, two mountain rescue teams, six ambulances and local police were heading for the site, but the weather could mean it took them hours to arrive, a civil protection agency spokesman said.

No other deaths or serious injuries were reported.

READ MORE: Timeline of major earthquakes in Italy in past century

“This repetition of strong quakes is alarming for people who have already been so sorely tried,” Gentiloni said in Berlin.

A 30 year-old woman and a 17 year-old man were pulled out from the rubble, suffering from hypothermia, in the small town of Castiglione Messer Raimondo, the fire service said.

“Some areas have no electricity because of the snow, so even cellphones don’t work,” said Sante Stragoni, mayor of Acquasanta Terme, a town hit hard by a quake on Aug. 24 that killed 300 people. “The snow is two meters (six feet) deep in some areas,” he told SkyTG 24 television.

In Rome, buildings wobbled and the underground metro system was shut for several hours. Schoolchildren were sent home, and museums told visitors to leave. 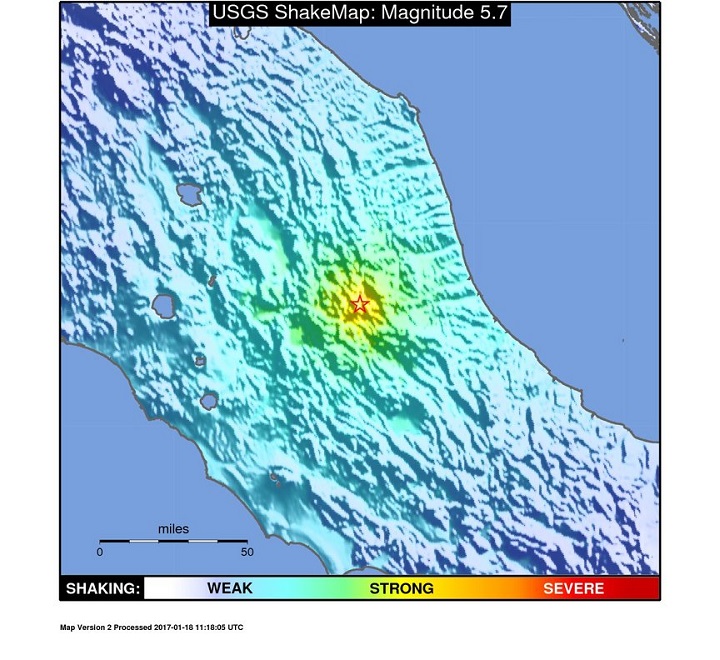 The U.S. Geological Survey said the three strongest earthquakes, with magnitudes of 5.3, 5.7 and 5.6, all struck in the space of an hour.

Gianluca Valsensise, a seismologist at Italy’s National Institute for Geophysics and Vulcanology (INGV), said the risk of another quake of similar size in the area was high.

Wednesday’s quakes could have come as one single event of magnitude 6 or higher, Valensise said. “The earth’s crust has for some reason decided to break up in smaller pieces.”

In all, there were 10 quakes over magnitude 4.0 clustered in a 10-km radius around Amatrice, which was devastated by last August’s tremor, along with dozens of weaker ones. The belltower of the town’s Sant’Agostino church, badly damaged in August, finally collapsed.

The Basilica of Saint Mary of the Angels in nearby Assisi was closed for the day as a precaution.

READ MORE: Why does Italy get earthquakes?

The Aug. 24 quake destroyed thousands of homes and businesses and more than 45,000 aftershocks have rattled the region, including a 6.6 magnitude quake in October, the biggest to strike Italy for 36 years.

Last year’s quakes reshaped more than 600 sq km (230 square miles) of land, lowering areas around the epicenter by up to 70 cm (28 inches), according to the INGV.