When you’ve been through as much as Canadian speedskater Denny Morrison has in the last 20 months, no victory is too small to celebrate.

“One of my favourite hashtags to tweet now is ‘small victories’ and so I tweet all my small victories,” the four-time Olympic medallist said.

The 31-year-old continues his long recovery back to full speed after a near fatal motorcycle crash (May 2015) and a stroke (April 2016), all within the span of a year.

Many would have a difficult time coming back at all, but not Morrison. Remarkably, the Fort St. John, B.C. native was not only back skating with the national team this past fall, but he qualified for the first half of the World Cup season.

“I didn’t expect that,” Morrison said. “I got to travel the World Cups, small victory, then I made ‘A’ group in the 15-hundred and then we got a silver medal in the team pursuit – that’s a big victory.”

No kidding. Incredibly, Morrison returned to the World Cup podium less than eight months after he was rushed to hospital in Salt Lake City, Utah by now fiancée Josie Spence, after suffering a stroke.

“The progress is more than remarkable, it’s beyond belief,” Morrison’s coach, Bart Shouten, said. “He’s defying all predictions, he’s basically doing better than anyone would have thought possible. It just vouches for his talent, for his ambition, for his will to come back.”

No one understands that better than Morrison’s parents – his support system – who rarely miss a race. 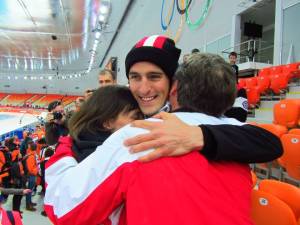 “It was a lot quicker then anybody thought,” his dad Denny said.

“Even to ever come back,” his mother Carol added. “He’s an incredible inspiration to everyone – including me – mostly to us I think. He just knows how to come back.”

But even with all those victories – the long climb back hasn’t always felt remarkable for the four-time Olympic medallist. Morrison admits the mental side has been one of the hardest setbacks – constantly battling his own expectations.

“I remember where I was and I want to be there, and so even when I visualize a race now, I visualize as if I’ve never been injured,” Morrison said. “Which is really good – positive – and then I have a race and it doesn’t quite go as I visualized.”

“Things just aren’t lining up perfectly, it’s not meshing and I just have a lot more work to do.”

“I feel like I’m 20 years old again, getting ready to skate my first Olympics,” he said.

It’s constant push and pull as he works toward his ultimate goal, a spot in his fourth Olympics Games, next year in Korea.

“Even in the inner circle, there are people who were doubting that but now, the most important people that know him well are like, ‘Yeah, he can do it again,'” Schouten said.

And it certainly does mean a lot to Morrison, who would love nothing more than to represent his country on the world’s biggest stage one more time and to try to add more hardware to his Olympic collection.

Which would be no small victory, to say the least.