Residents in Vancouver, the Lower Mainland and parts of Vancouver Island woke up to a winter wonderland on Monday morning with snow falling across the region.

It has been roughly 1,000 days since the last significant snowfall in Vancouver. The last big snowfall was in February, 2014.

Snow started falling heavy around 3:30 a.m., accumulating on roads and cars, especially in higher elevations. Cool, moist air swept in from the west leading to the snowfall. Global BC meteorologist Mark Madryga says up to eight centimetres fell at higher elevations but most places saw between two and four centimetres.

The snow affected the morning commute on transit and on the roads and forced the closure of some schools. A snowfall warning was re-issued by Environment Canada Monday afternoon.

Classes have been cancelled at SFU Burnaby Mountain and all BCIT campuses because of the snow conditions for the remainder of the day.

University Highlands Elementary School on Burnaby Mountain has been closed. All other schools in the Burnaby District are open.

There are currently no other school closures in effect.

Snow accumulation on Bby Mtn. It's really coming down up here. pic.twitter.com/Z1k2jxsmHv

Snow fell heavily on Highway 1 through Burnaby and commuters are being urged to allow for extra time to get to work or school today. Winter driving conditions are in effect.

Highway 99 was especially slick between Highway 91 and Ladner Trunk Road in Delta. A number of vehicles spun out due to the conditions.

It was also very slippery  on all the bridges.

Good morning! Have a safe drive into work today! Please give yourself extra time for your commute & #SlowDown. #DriveSafely #Snow #VPD https://t.co/9LxCpM2gbU

On BC Ferries, the Tsawwassen to Southern Gulf Islands route and the Horseshoe Bay to Langdale Route were both delayed due to adverse weather conditions and crews were late getting to the ships.

More buses, besides the Burnaby Mountain buses, were also affected this morning.

Bus #143 is routing down Clarke Road to Lougheed Station, omitting SFU, due to the road conditions.

Bus #16 service is routing via Hastings to Kootenay Loop in both directions, omitting Renfrew.

Bus #129 service is routing via Sanderson Way, Willingdon, Canada Way, and Gilmore in both directions.

A passenger bus in North Vancouver crashed into a tree near Coleman Street and Mountain Highway, resulting in a few minor injuries. 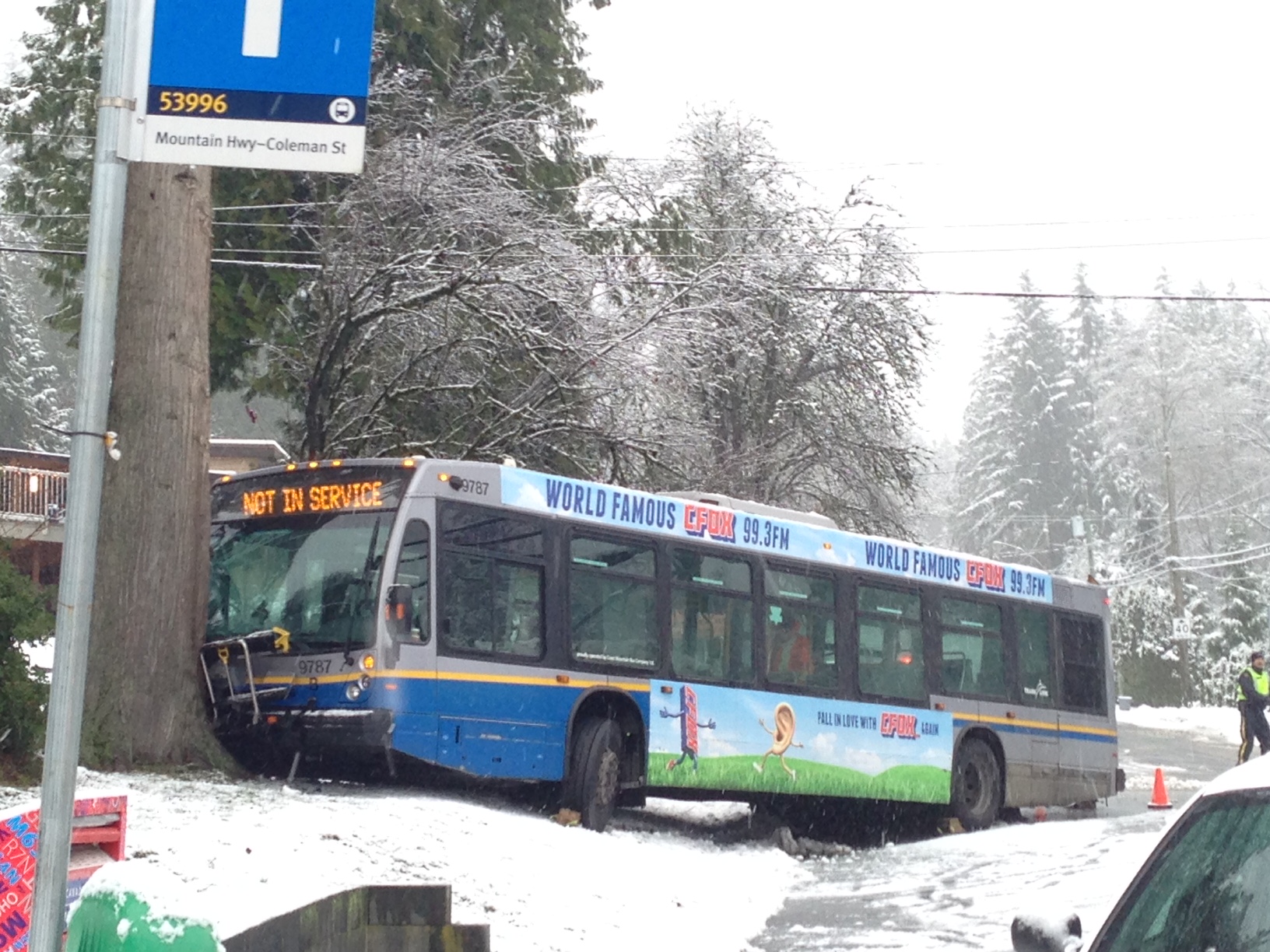 HandyDart in Vancouver and Richmond, North and West Vancouver are running essential service only.

SkyTrain users may experience some delays due to the heavy snow setting off safety alarms at several stations. The Canada Line is not affected.

Airport conditions are also not affected but Vancouver Airport says check the status of your flight before leaving home.

It's looking wintery out there! Our cews are hard at work. Give yourself extra time on the road & check the status of your flight on YVR.ca

All Harbour Air flights are affected today so check your flight status before you leave for the terminal.

On Vancouver Island, near Victoria, snow is accumulating at higher elevations but it is not currently sticking downtown.

Some areas of Vancouver and the Lower Mainland could see up to five centimetres of snow fall today, especially at higher elevations. It is expected the snow will turn to rain later this morning.

It is expected to be cold and windy Monday night but conditions will be cold and dry until Thursday when we could expect more snow in Vancouver and the Fraser Valley.

Tuesday and Wednesday will be cold however, with temperatures being five to ten degrees below normal, with overnight lows reaching -5C.