A beloved pig statue stolen from a pub in downtown Calgary on the weekend is heading back to his home.

Henry the Pig was taken from The Unicorn, located in the 200 block of 8 Avenue S.W., early Sunday morning.

READ MORE: Henry the Pig stolen from The Unicorn pub in downtown Calgary

The pignapping was caught on camera; surveillance footage appeared to show a heavy-set man in shorts and a baseball cap sitting on the fibreglass statue, before picking Henry up and walking out the door.

Following the hog heist, staff at The Unicorn took to social media to plead for Henry’s safe return using the hashtag #BringHenryHome.

Our beloved pig Henry was taken from us yesterday. If seen please call @unicorncalgary #bringhenryhome pic.twitter.com/JUCMDnoGPa

Late Thursday evening, The Unicorn posted a statement on its Facebook page saying Henry had been saved.

The post included three photos of Henry – who had been dropped off at local radio station CJAY 92.

The photos show Henry in a black and white Hawaiian shirt with a note that states he “just went on vacation” because he was a “pig looking for a party” – and he had a “wicked time.” 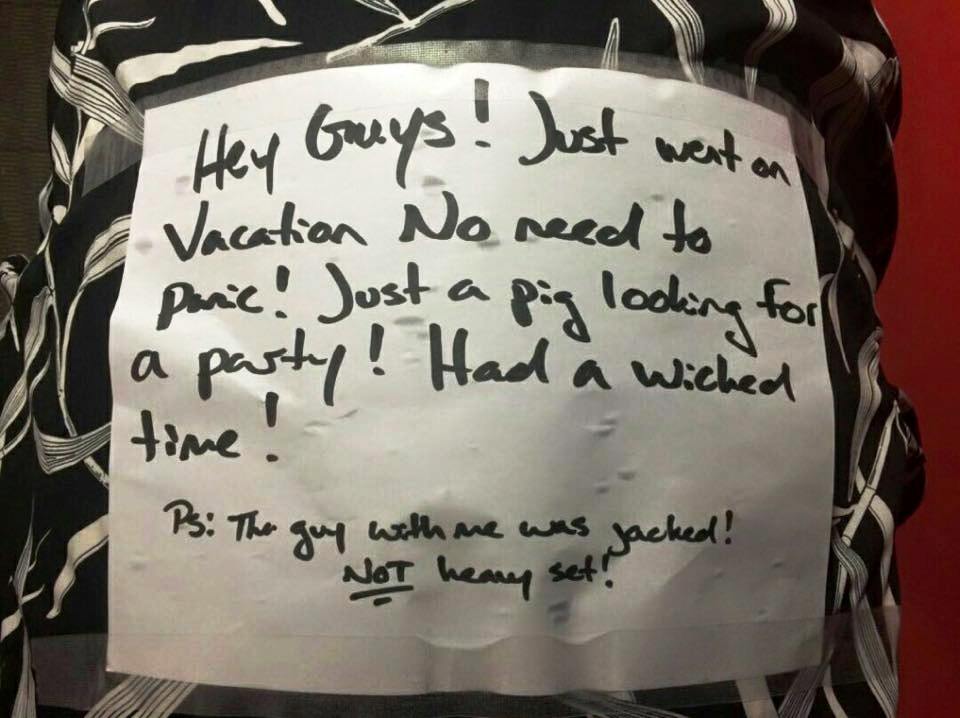 It’s actually the third time Henry the Pig has been stolen from The Unicorn.

“Maybe we just need to bolt him down,” The Unicorn’s Mel Lafleur said. “Make him a permanent fixture.”

Just two weeks ago, another Calgary eatery released surveillance footage of a man stealing two Japanese Maple trees from outside the establishment.

The trees, worth about $700 each, were taken from the Royale Brasserie on 17 Avenue by a man walking his dog.