“There’s nothing free in government,” says Kevin Lacey, Atlantic director for the Canadian Taxpayers Federation. “This promise today is paid for with borrowed money. That money that’s borrowed today will mean higher taxes to the very students that are benefiting.”

“Investing in education is the right path for the province, it promotes business investment,” Lacey said. “But there’s no evidence to show that investing more money in lowering tuition payments will actually encourage more people to go to university. There’s much larger factors than just cost to why people go to school and why they don’t.”

TAB will provide tuition payment for students whose family’s gross annual income is $60,000 or less.

While it is the newest student assistance program announced it’s not the first, and Lacey says students had it better in the past.

“They decided to cancel two tax credits that were actually worth more than this commitment for this free tuition. So in the end students are down more than they’re up as a result of this promise.”

“This is a highly political move by the government.”

Students enrolling in New Brunswick universities and colleges as early as this fall will benefit from the program, however, only publicly funded institutions qualify.

“The fact that the private sector was left out is no surprise,” says Karen Furlotte, financial director of the Atlantic Business College.

“Over the last six years the general feeling in the private sector is that our government is trying to put us out of business.” 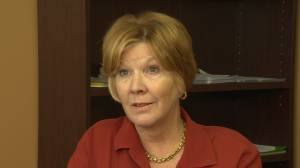 “I can certainly see where the numbers of students at universities are going to increase, but is that going to benefit our province or is that going to be another drain on taxpayers?” Furlotte says. “Will these university graduates be able to stay and find employment in New Brunswick or will they be forced to leave like so many of our other young people?”

“Education and the government’s role in assisting education is an investment, not a cost,” says Constantine Passaris, UNB Economics Professor.

He says it’s a big step in the right direction and a decision worth celebrating.

“Taking money away from other sources and putting it in education, investing it in our young people is an absolutely essential thing to do at this time and I see no downside to it,” Passaris says.

“All of this creates a synergy of advantages and benefits that I think is just tremendous.”