Canada sells off large chunks of its gold reserves

Editor’s Note: A previous version of this story reported that half of gold reserves had been sold off in early 2016, leaving 1.7 tonnes in the vaults by the beginning of February. Those numbers were based on International Monetary Fund statistics released Feb. 4. The IMF figures dated from late December, however, and additional sales were conducted through January, dropping the reserves to 0.62 tonnes. Global News regrets the confusion caused.

The government of Canada sold off large chunks of its gold reserves in recent weeks, continuing a pattern of moving away from the precious metal as a government asset.

According to the International Monetary Fund’s International Financial Statistics, Canada held three tonnes of gold reserves as of late 2015.

The latest data, published last week by the Department of Finance, show the total Canadian gold reserves have now dropped to 0.62 tonnes. That’s less than 0.1 per cent of the country’s total reserves, which also include foreign currency deposits and bonds. In comparison, the U.S. holds 8,133 tonnes of gold, while the United Kingdom weighs in at 310 tonnes.

Reached by Global News on Wednesday evening, a spokesperson for the finance department said the sale “was done in the normal course of business for the government. The decision to sell the gold was not tied to a specific gold price, and sales are being conducted over a long period and in a controlled manner.”

This latest sell-off is indeed part of a much longer-term pattern of moving away from gold as a government-held asset. According to economist Ian Lee of the Sprott School of Business at Carleton University, Ottawa has no real reason to keep its gold reserves other than adhering to tradition.

“Under the old system, (gold) backed up currencies,” Lee explained. “The U.S. dollar was tied to gold. One ounce was worth US$35. Then in 1971, for lots of reasons I won’t get into, Richard Nixon took the United States off the gold standard.”

Gold and dollars were interchangeable until that point, he said, but in the modern financial world, the metal is no longer considered a form of currency.

The amount of gold the Canadian government holds has therefore been falling steadily since the mid-1960s, when over 1,000 tonnes were kept tucked away. Half of those reserves were sold by 1985, and then almost all the rest were sold through the 1990s up to 2002.

By last year, Canada’s reserves were down to just three tonnes, and the latest sales have now carved that back by over 60 per cent. At the current market rate, the value of 0.62 tonnes of gold comes in at just over CAD$38 million, barely a drop in the bucket when you consider the broader scope of federal finances.

According to Lee, there may soon come a time when Canada’s gold reserves are entirely a thing of the past. There are better assets to focus on, he argued, calling the government’s decision to dump gold “wise and astute.”

“It gives them more strategic flexibility to sell the gold, take the money and invest in U.S. government bonds, or United Kingdom bonds or French bonds or German bonds,” Lee said.

“Central banks can hold the government bonds of other countries, and they also hold actual dollars. The Chinese Central Bank actually holds hundreds of billions of U.S. dollars. Dollars are very liquid, so are government bonds, especially of a Western country.” 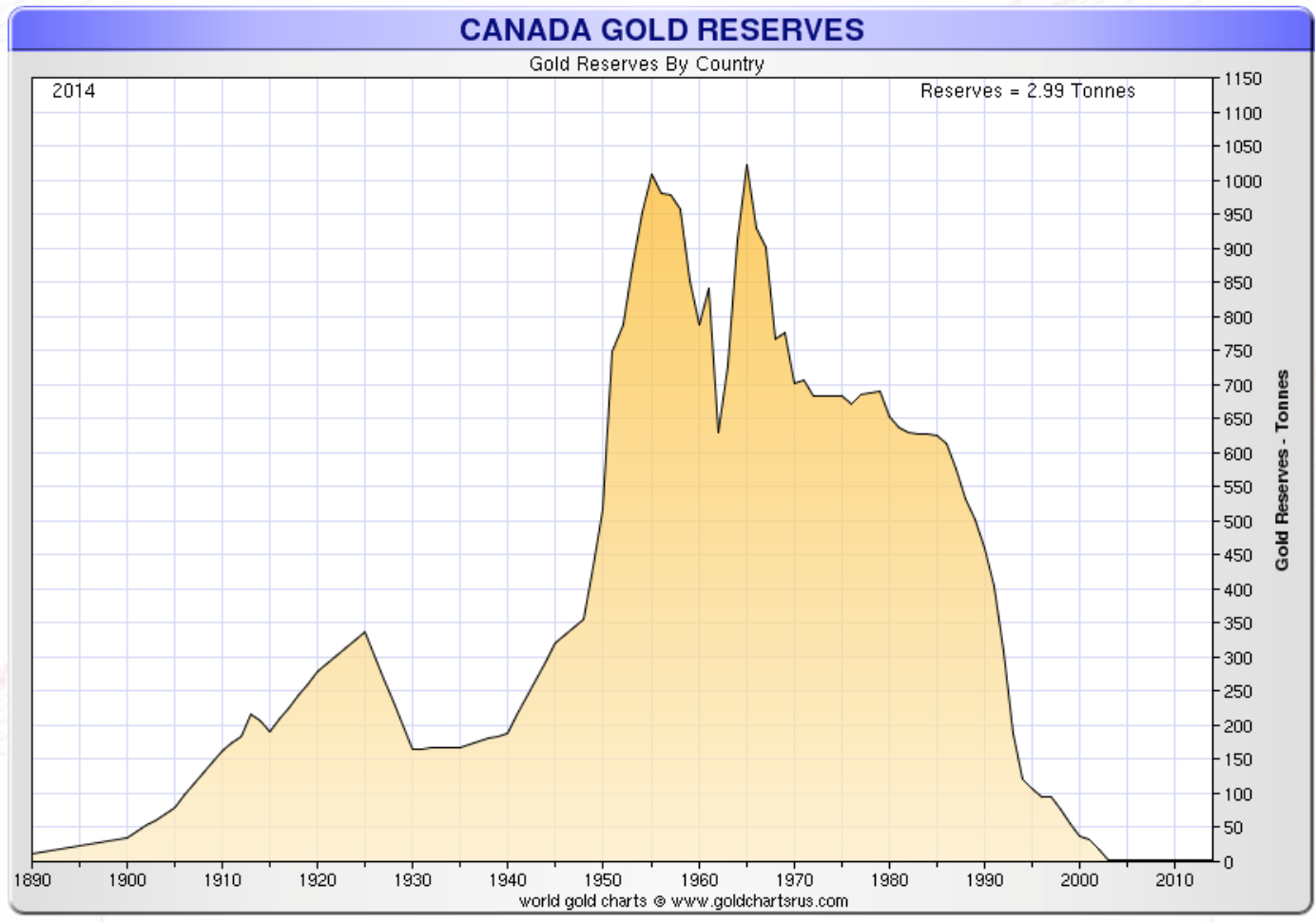