RCMP, doctors worry fentanyl use on the rise in Nova Scotia

WATCH ABOVE: There are worries a trend of fentanyl abuse and deaths will soon make its way to Canada’s East Coast. Now Halifax RCMP and doctors are sounding the alarm. Julia Wong reports.

HALIFAX – Police and health professionals in Halifax are sounding the alarm over a powerful opioid that could be making its way to the province.

Fentanyl is a synthetic drug that is similar to morphine, according to pharmacist Peter Forna, who works at Scotia Pharmacy.

“It attaches to the opioid receptors, which cause that sense of euphoria,” he said.

“The issue is if you have too high of a dose then it can repress your respiratory function to the point where you suffocate and die.”

There have been several recent deaths in B.C. and Saskatchewan connected to the drug, and Nova Scotia RCMP are concerned the trend will move to Canada’s East Coast.

“Fentanyl is a drug we’re seeing more and more of especially since the beginning of this year,” he said.

He said most users tend to be people who are already frequent drug users.

While Church does not know the exact reason for the recent uptake, he suspects it may be the result of experimentation, and he has some stern words for potential users.

“If you’re taking a drug [where] you don ‘t know the drug you’re taking, that’s extremely dangerous,” he said.

Dr. Samuel Hickcox, an addictions services physician with the Nova Scotia Health Authority, said that while the abuse of fentanyl in Nova Scotia isn’t as common as other opioids right now, he has seen indications it may become a bigger issue.

“We’re seeing a very slow introduction of this medication into people’s pattern of abuse. We’re starting to see a slow increase in use. There is definitely an acceleration of very risky use happening,” he said.

Hickcox said it appears the drug is appealing to both recreational drug users and persistent drug abuses. He is worried about the mobility of the drug from out Western Canada. 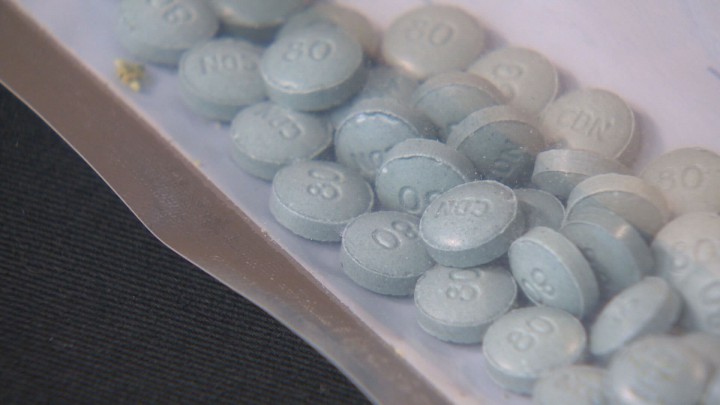 “[The tablet form of fentanyl] is most commonly being acquired out West, primarily in northern Alberta in the oilpatch area. We’re seeing people who would reside in Nova Scotia some of the year [and] they would work out West. It would be out West that they would be exposed to this new drug,” he said.
Story continues below advertisement

“I’m very concerned we’re going to see a similar spike in fentanyl use and coming with that, inevitably, would be a spike in the number of fentanyl-related deaths.”

Hickcox is also concerned about where people are getting the drug.

“We believe…that these tablets are actually being manufactured in illicit labs. That’s not something we know definitively [though]. [But] We are concerned the tablets contain multiple drugs and the people who are using these drugs have no idea how much fentanyl is actually in each of these doses,” he said.

He said the euphoric effects of the drug are not worth the risk to users.

“It very powerfully slows down our breathing and can actually lead to people going into what we call respiratory arrest where their drive to breathe actually stops. And that’s actually a cause of death for people.”

Forna said fentanyl is 1,000 times stronger than morphine and the risk of the drug is greater for people who are recreational drug users.

“If you are someone who has never taken an opioid, meaning morphine or fentanyl or medications such as that, a lower dose is going to affect you a lot more because you have no tolerance to it,” he said.

“If your body is not used to a high dose of it, or even a lower dose of it, then you can run into respiratory distress. Fentanyl has a very quick onset of action, so it can happen within minutes.”

The pharmacist suspects the drug is becoming more popular because it is now available in tablet form; it was previously available as a patch.

“I guess what’s happening now is that it’s just more accessible to people to use. Whereas before, people wouldn’t be at a party and take a patch,” he said.

She heads an organization called Get Prescription Drugs Off the Street, and said people who dabble in prescription drug abuse are taking a huge risk – not only for the individual, but for his or her loved ones.

“It’s devastating and it’s so dangerous in the fact that when you’re using these drugs, there’s not a lot of warning signs or time to get to the hospital when overdosing. If you’re by yourself, you basically go to sleep and you don’t wake up,” she said.

“It’s something you never get over. Every occasion, every birthday, every Christmas, it’s a reminder somebody you love so much is gone.”

Graves hopes Nova Scotians will heed the warnings from police, doctors and pharmacists to avoid the drug.

“When I started to get prescription drugs off the street, I started to think myself and other members could help prevent families from experiencing that type of loss and that type of tragedy. It’s excruciating. It’s traumatic. It impacts so many people.”