CALGARY – The Alberta college of physicians and surgeons has added benzodiazepines, like Ativan and Valium, to its Triplicate Prescription Program over concern the drugs are being increasingly abused.

“We know that drugs like this are subject to misuse because they’re an easy way for people to get high,” said Kelly Eby, director of communications for the College of Physicians and Surgeons of Alberta (CPSA).

Set up in 1989, the Triplicate Prescription Program (TPP) is used to monitor the prescribing and dispensing of high risk prescription medications. There are currently dozens of medications monitored by the program, including powerful opiate pain relievers like Oxycodone and stimulant ADHD medications like Ritalin. In 2016, all codeine-containing products, including Tylenol 3 and 4, will also be added to the list. 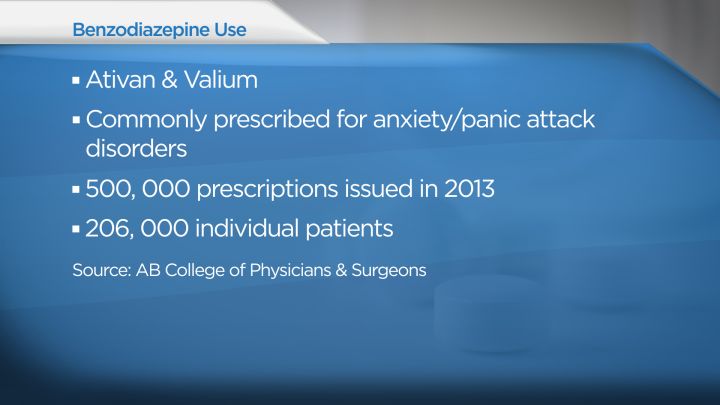 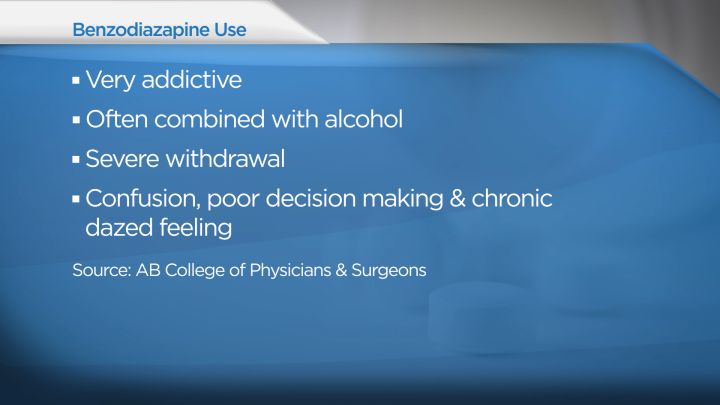 Kim Bush, the associate director of counselling for the Calgary Counselling Centre, said these drugs can be very addictive. She said those with dependencies often combine the medications with alcohol.

“If people are using (a drug like Ativan) every day, it’s like taking a stiff drink, so people get dependent on it,” said Bush. “If they go off it, what happens is they end up with rebound panic attacks or rebound anxiety, because their body is no longer able to cope.”

The Canadian Mental Health Association said combined with depression, anxiety disorders are the most commonly diagnosed mental disorders in Alberta. Bush said while drugs can be very helpful for patients to manage spikes in their illness, patients should seek other strategies long-term.

“You need to find coping mechanisms to manage your anxiety on a daily basis so you’re not relying on pills,” said Bush.

Anyone who feels they may be experiencing a dependency or addiction to benzodiazepine should talk to their doctor about safe ways to reduce their dosage. The Calgary Counselling Centre also offers therapy on a sliding fee scale.

Related News
This article is not written or edited by Global News. The author is solely responsible for the content. © Heather Yourex-West, 2015