“Bees are responsible for 35 per cent of the pollination on the planet,” said Marie-Claude Brousseau, the Château’s Public Relations Director.

“Since the population is decreasing we figured we had the responsibility to help them to be secure and safe so they can pollinate in the future and reproduce easily.”

Staff embraced the Wild for Bees program, using an old chicken coop and leftover copper to build what they call a “luxury hotel” for solitary bees in the chef’s garden.

Ten others were built in public spaces across the country in Vancouver, Calgary, Toronto and Halifax.

Unlike honeybees who live in colonies, solitary bees have to fend for themselves without a Queen bee.

Human activity has made it gruelling for them to find safe nesting places.

So much so that Quebec’s Agriculture Minister Pierre Paradis said he is considering following in Ontario’s eco-footsteps and capping mnemonics, a type of pesticide blamed for the widespread decline in the bee population.

“Next year, if they want to use it in Quebec they will need a paper signed by an agronomist, a professional that says they need to use it to control pests in their field,” said Pierre Paradis.

Farmers spoke out this week to say they’re worried a cap will be “unworkable.” 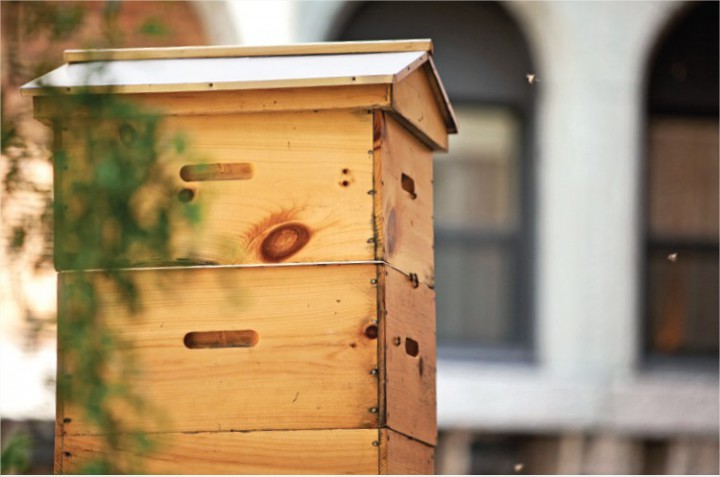 Back at the Château, chef Baptiste Peupion insisted protecting bees is crucial: one out of every three bites of food we eat is pollinated.

The Château will offer a bee-themed menu and signature drink this summer to raise awareness.

Brousseau also encouraged everyone to give the non-stinging solitary bees the royal treatment.

“You could build your own bee hotel in your backyard if you wanted to.”

“You only have to provide them with a dry and secure environment,” she said.

Take a look at the bee-themed menu below: