Cisco Road Wildfire south of Lytton 1,500 hectares in size, but no longer growing

WATCH: The latest on the fire situation in Lytton. Catherine Urquhart reports live from the area.

VANCOUVER – An Evacuation Alert and Order have been issued by the Lytton First Nations band, as a large uncontained wildfire continues to burn near Lytton.

The wildfire was estimated to be around 600 hectares in size at 4 p.m. Thursday afternoon, but grew to 1,500 hectares by Friday morning. One structure has been destroyed and 10 people remain out of their homes.

However, by Friday evening, the BC Wildfire Management Branch said that favourable weather conditions had allowed them to stop the growth of the fire.

Smoke can be seen about 10 kilometres south of Lytton and the fire is outside the village on the west side of the Fraser River, and can be seen from Highway 1. It is known as the Cisco Road Wildfire, and is zero per cent contained.

Fire Information Officer Melissa Klassen says the fire is burning very aggressively, threatening homes within 500 metres. Twenty firefighters were on scene overnight, reinforcing a control line along the eastern side of the fire.

More than 80 firefighters are battling the fire, along with seven helicopters.

A large plume of smoke is also visible and residents tell us it is very windy in the area. Klassen said there were are strong wind gusts coming from the south of up to 40 to 60 km/hr. 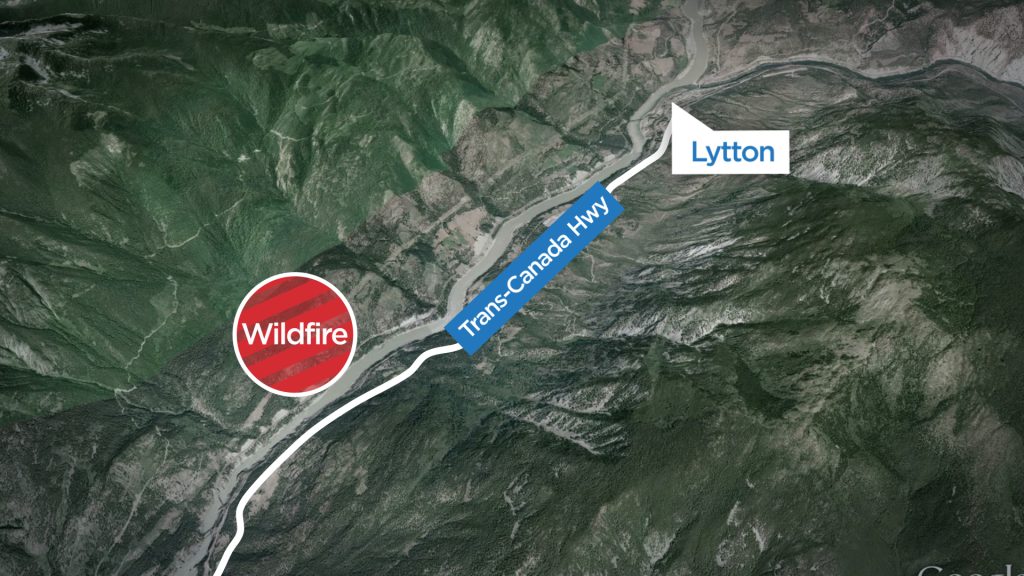 “This is a very active situation and it’s continuing to change over a very quick period of time and obviously we need every available route and area for our crews who are hard at work,” she said.

Klassen added that high winds were a problem, especially gusts between noon and 4:30 p.m.

Nearby resident Paul Lightfoot said appears to have started along the CN Rail line.

CN Rail spokesperson Emily Hamer confirmed that the fire started near their line, but wouldn’t say whether it was started by grinding work being done. She said rail operations in the area have been suspended, and that they are focused on helping crews contain the fire.

There are currently 80 firefighters on site. Three helicopters are providing bucking support for ground crews. Klassen says crews are seeing some Rank 5 fire behaviour at the head of the fire, meaning it is very aggressive, organized and all-consuming.

There is no word yet on the cause of the blaze but fire officials tell Global News it is definitely human caused.

There was a community meeting Thursday at the Memorial Hall in Lytton for evacuees. In addition, Lytton First Nations Evacuees can call 250-320-2671 for more information.

The terrain in the region is very dry.

Lytton village councillor Rob Austen spoke to BC1 shortly after the fire started.