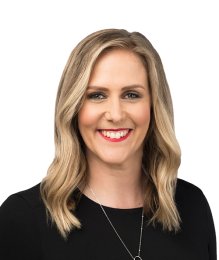 Quinn Phillips is a Sports Reporter/Anchor for Global News Edmonton.

Born and raised in Edmonton, Quinn grew up a fan of local sports teams. Her Dad, Rod Phillips, was the radio play-by-play man for the Edmonton Oilers and she spent her childhood at Northlands Coliseum (now Rexall Place) watching the Oilers practice and listening to the media.

Quinn took an interesting path, working on-air in Yorkton, Lethbridge, and Red Deer before leaving the television industry to work in media relations. Quinn and a colleague won an international media relations award while at the University of Alberta. She didn’t realize she missed the industry until she started filling in at Global Edmonton in September 2013.

A graduate of MacEwan’s journalism program and NAIT’s television program, her passion is reporting. The ability to tell athletes’ stories in a creative or fun way is what drives Quinn every day. She considers getting to meet new people daily as a big perk of the job.

Quinn likes to keep active working out with friends, doing yoga, or torturing herself by running stairs. Music is another big part of her life as she tries to take in as many live shows as she can. She has attended a number of music festivals including Coachella and Lollapalooza, and plans to take in many more.

WATCH: Quinn Phillips answers a few questions for Global Edmonton viewers, including: how would people describe you, and what do you do on your days off?

01:48
Global News Hour at 6 Edmonton
Unlikely hockey fan mixes her passion for art and the game with Connor McDavid portrait

02:01
Global News Hour at 6 Edmonton
From Barrhead to bobsled: Melissa Lotholz’s journey to the ice track

02:00
Global News Hour at 6 Edmonton
NHL players feel lucky to be playing during the pandemic

01:56
Global News Hour at 6 Edmonton
Spruce Grove Saints development model putting players in a position to be noticed by NCAA

01:55
Global News Hour at 6 Edmonton
U of A Golden Bears volleyball on season spent on the sidelines

The Edmonton Trappers entered the Pacific Coast League 40 years ago this year, and a 16-year-old baseball fan was a big part of the organization and its name.

Scottish artist Rebecca Thomson, who fell in love with hockey about six years ago, is now drawing her favourite players and it’s caught the NHL’s attention.

The Central Division of the WHL is getting set to return to play. The Edmonton Oil Kings players will report to the team Saturday with the season opening Feb. 26.

Curlers from Alberta are concerned over the lack of time to prepare for the upcoming Scotties Tournament of Hearts and Tim Hortons Brier.

From Barrhead to bobsled: Melissa Lotholz’s journey to the ice track

Melissa Lotholz had a successful career as a brakewoman for one of bobsleigh’s best. Now she’s taking on a different role as a pilot in the two-man event.

EE Football Team defensive back Jordan Beaulieu found an interesting way to pass the time with no CFL season – he became a reality TV star.

Some of Canada’s top swimmers took part in the second season for the International Swimming League —but because of COVID-19, the competition had to be held in a bubble in Budapest.

An Edmonton track star, who is working towards a degree in kinesiology, has an artistic side. Cassandra Grenke has been designing custom shoes for about 18 months and is selling pairs across western Canada.

A NAIT Ooks basketball player has lived a life full of many experiences, and he’s only 23 years old. The scariest experience came in 2013 when he witnessed a suicide bomber attack.

A yet-to-be-published study says it’s okay to wear a mask, but social distance and hand washing are still the most effective ways to prevent spread of COVID-19.

AJHL moves to pay model for sustainability during COVID-19 pandemic

The Alberta Junior Hockey League decided to charge its players a monthly registration fee to subsidize the league until it can sell tickets.

A mental performance coach with the Canadian women’s national basketball team talks about the steps of disaster and how he helped his athletes cope with the pandemic and anti-racism protests which have been difficult to digest.

NAIT has closed its pool due to financial constraints, as well as because of low usage by the post-secondary institute’s staff and students. But that has left some aquatic groups scrambling for a new home.

Behind the Game: training athletes in the off season

Trainer Jordan Taylor started with volleyball two years ago, but now hosts athletes from a variety of sports in his gym, giving them workouts that are suitable for their respective sports.

For the second year in a row, Muslims in Canada are celebrating #EidAlFitr during the COVID-19 pandemic. trib.al/IZpnqHc

Some Tesla investors, along with environmentalists, have been increasingly critical about the way bitcoin is “mined… twitter.com/i/web/status/1…

The violence has reached deeper into Israel than at any time since the 2000 Palestinian intifada, or uprising. trib.al/xdaWg6u