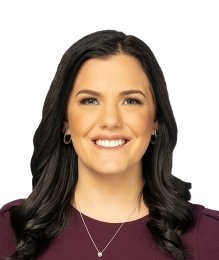 Prior to moving to Edmonton, she worked her way through the ranks at Global Lethbridge, starting as a videographer in 2008 and eventually moving to the News Hour co-anchor/producer position.

Born and raised in Stavely, Alta., she grew up on a farm, helping out her parents when she wasn’t at the skating rink. Agriculture and a love of politics eventually led her to the Communications Arts program at Lethbridge College. While attending classes and working as a professional skating coach, she landed her first broadcast job at CJOC Lethbridge in the promotions department. She eventually moved to the news department where she worked for a year as a reporter and weekend anchor.

In 2009 she was honoured to be chosen as the recipient of the “Troy Reeb Distinguished Alumni Internship” where she spent time with Global Toronto and Global National.

In 2015, Quinn was diagnosed with Type 1 diabetes. The diagnosis came as a surprise but it has sparked a fire within her to find a cure. She spends time working with various diabetes organizations in Edmonton and proving that even though diabetes may slow her down sometimes, it will never stop her from accomplishing her goals.

In her spare time, she enjoys spending time with her husband, son and fur babies, skating in the winter, going to the lake in the summer, cycling, running and being outdoors.

WATCH: Quinn answers a few questions for Global Edmonton viewers, including: what’s your favourite part of the job, and what is the best part of living in Edmonton?