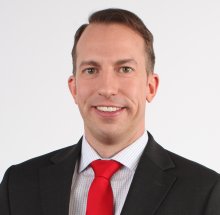 Mike Le Couteur officially joined the Global National family in October 2011, but he has been a frequent contributor to the program over the past several years.

He started filling in as a correspondent when the Dawson College shooting in 2006 thrust the local reporter onto the national stage.

Mike’s vast experience in covering countless provincial and federal elections serves him well as he now reports from Parliament Hill for Global National.

Since joining the National team, Mike has been on the front lines of history, covering stories like Superstorm Sandy in New York and New Jersey, the Lac-Mégantic train disaster and the shooting on Parliament Hill.

His tenacious style has also led him to break several stories in the Senate spending scandal that has been gripping the upper chamber for years.

He jumped into the Global Montreal newsroom right after his schooling…literally.

His first shift was the same day as his last exam.

For the next 12 years, Mike would go on to be front and centre covering Quebec’s biggest stories, such as overpass collapses, to playoff riots and floods.

He has also contributed to Global’s weekly newsmagazine 16×9, putting together a story on Capt. Brian Bews, the CF-18 pilot who narrowly escaped death at an air show in Lethbridge, Alberta July 2010.

Off camera, Mike is known by his colleagues for his razor sharp wit.

02:40
Global National
Ontario to announce loosening of some COVID-19 restrictions

02:21
Global National
Canada to receive no Pfizer-BioNTech vaccines next week

02:41
Global National
Quebec’s pandemic curfew is put to the test

Foreign policy experts aren’t sure the Trudeau government isn’t putting its money where its mouth is. Continue reading →

Miller stressed structural changes that needed to be addressed to ensure the vaccine can make its way through to remote communities. Continue reading →

‘It’s our duty’: How giving Canadians a basic income can improve health and reduce costs

The COVID-19 pandemic has resurfaced the debate on whether Canada should have a national basic income. Continue reading →

The Royal Canadian Legion is changing its Poppy Campaign as the COVID-19 pandemic limits how many veterans can be in stores and malls across the country. Continue reading →

Unifor national president Jerry Dias said the LEEFF program has been largely ‘ineffective,’ adding that it was introduced too late into the pandemic. Continue reading →

The New Reality: COVID-19 creating a boom time for some industries

As the Canadian economy reopens, businesses are reorienting, and it’s believed the new opportunities created by COVID-19 will also help the country get through the recovery. Continue reading →

‘We need a permanent and single response to the situation,’ an organizer with the Migrant Workers Alliance for Change told Global News. Continue reading →

Sen. Leo Housakos says he did not intend to sent the email from his Senate account but made a mistake. Continue reading →

The border between Canada and the U.S. will be temporarily closed to non-essential traffic, U.S. President Donald Trump announced in a tweet on Wednesday. Continue reading →

Canada
January 15, 2020 8:10 pm
Stephen Harper steps down from Conservative Fund board as potential candidates gear up

Canada
January 14, 2020 2:21 pm
Baird report on why Tories lost the election is finished, but won’t be made public

A Conservative source would not say whether the caucus would get to see the report. Continue reading →

The move comes amid ongoing reforms to the Senate. Continue reading →

U.S. Chairman of the House Ways and Means Committee Richard Neal says the focus of his meeting with Canadian officials is on labour standards in the new NAFTA deal. Continue reading →

The certificate is similar to the vaccine passports being developed by the European Union and already introduced by… twitter.com/i/web/status/1…

“Ladies and gentlemen, this is a real flooding situation we have not seen in a long time," the Maui County mayor sa… twitter.com/i/web/status/1…

The appointments came as New York lawmakers were privately debating whether to join calls for Cuomo to resign, or u… twitter.com/i/web/status/1…