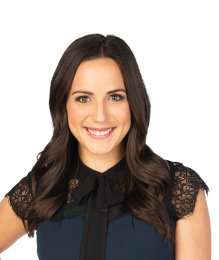 Margeaux is Global Edmonton’s dedicated community reporter focused on bringing community, municipal, and local business’ events and initiatives to our audiences.
Born and raised in Edmonton, Margeaux has enjoyed some unique experiences in our city. One of them being a member of the Edmonton Eskimos Cheer Team for several years.

Her passion for sports and entertainment led her to her first media gig in 2009, when she was asked to co-host a Shaw TV show called The Green and Gold Gridiron Show with Chris Scheetz from CISN Country. Margeaux and Chris hosted that show for three seasons, and it was a gig that would lead Margeaux to explore working in media as a full-time career.

As if she wasn’t busy enough, attending the Alberta School of Business, and working in marketing full time, Margeaux took on a new role with the Edmonton Oilers. The Edmonton Oilers Octane Cheer Team launched in 2010, and Margeaux acted as the assistant coach and choreographer for three seasons.

Longing to further her career in media, Margeaux made the move to New York City where she enrolled in a Broadcast Journalism program at the New York Film Academy. This would complement the Bachelor of Commerce degree that she later received from the University of Alberta.

Margeaux’s first full-time media job was with the Calgary Stampede, where she produced and appeared in content for the Stampede’s YouTube channel. In June of 2013, the Southern Alberta floods devastated the Calgary Stampede Park. Margeaux was one of the first videographers on-site to capture that historic event.

Her content was later aired on major television networks throughout North America and caught the attention of The Weather Network, which later offered Margeaux a job as a video journalist covering weather events across Western Canada. Floods, blizzards and catastrophic hail events were a regular part of her beat, and soon enough, Global Edmonton had its eye on Margeaux as their newest weather specialist.

After two and a half years with Global Edmonton, Margeaux had big news — she was pregnant! While enjoying maternity leave with her son Cash, Margeaux was offered her new role allowing her to focus her story telling efforts on the ideas and events that make Edmonton a great place to live.

As a lifelong learner, Margeaux is also enrolled part-time in the MBA program at the University of Alberta where she plans to specialize in public policy and management.

Showcasing the work Terra Centre does for young Edmonton parents

Walmart fights hunger in Edmonton as part of national campaign

Indigenous audio and video archive purchased for $1 in Edmonton

Deep freeze festival to kick off in Edmonton

@Quinnohler I haven’t known what day it is for at least 4 months!

Here’s a basic list of what you should harvest when the temperatures dip to zero, and what can hold on for a couple more weeks. Continue reading →

Preserving ‘a piece of Edmonton’s history’: Construction begins on renovation and expansion of Highlands School

As the Edmonton Public School Board moves forward with plans to expand Highlands School, plans are also underway to preserve its charm. Continue reading →

Cargo traffic at EIA has grown 18% over the past decade, helping ensure direct flights to popular destinations stay in place. Continue reading →

The competition heats up: pair of new arcade bars open in Edmonton Friday

Hospitality experts say it’s no longer about drinking and dancing, it’s about an experience. Continue reading →

Tech startups getting a boost at Edmonton International Airport

Technology development and commercialization is not what comes to mind when you think about an airport authority, but that’s exactly what’s happening at EIA. Continue reading →

How to spot a space rock: University of Alberta video helps differentiate earth rocks from meteorites

“They’ve been training three to four months — some of them have been training for a year — in order to get ready for this event,” said Maj. Nathan Korpal. Continue reading →

“One of the things we learned very quickly is that Boyle Street is more than just a community centre downtown that everyone sees and knows about.” Continue reading →

They met after a 2017 fringe show outside of Old Strathcona’s Steel Wheels pizza and the following year, the two were engaged at the same spot. Continue reading →

‘It didn’t have an expiry date! Why not try?’: Edmonton-area woman redeems 34-year-old free Disneyland pass

A free trip to Disneyland is every kid’s dream come true… but this one was three decades in the making. Continue reading →

“Fifty years ago, I was a 15-year-old with a vision,” said Shelley Tookey. “Some people have jobs they don’t love, but I love what I do.” Continue reading →

The rain may be putting a damper on the summer plans for many Albertans, but it is proving magical for mushrooms — including near Devon, where a massive puffball has been discovered. Continue reading →

“The response and just the critiques we’ve been getting has just been amazing,” said Rust Magic co-founder Trevor Peters. “People just like being around all the walls.” Continue reading →

The rare pairing of lunar events is expected to shine over North America on the night of Oct. 31, just before Dayli… twitter.com/i/web/status/1…

From private, to public, back to private: The UCP is putting driver's licence exams back into the hands of registri… twitter.com/i/web/status/1…