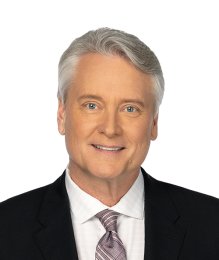 Gord Steinke is well known to Edmontonians. As an award winning journalist and bestselling author, Gord is one of the region’s most popular news anchors. For over 30 years, Gord has co-anchored Edmonton’s #1 Newscast, Global News Hour at 6, weeknights on Global Edmonton. He also anchors Global News at 5.

Gord began his broadcasting career in Saskatchewan, where he attained his Bachelor of Arts in Journalism and Communications from the University of Regina. His first job was in print journalism, then radio, before becoming a television reporter and anchor in Regina.

He later ventured south of the border and worked at the All News Channel in Minneapolis, Minnesota (KSTP) serving as both an anchor and reporter.

After several years in the U.S. Gord set his sights back on Canada and seized the opportunity to join ITV (now Global Edmonton) in 1992. His hiring proved to be very popular with viewers. Edmontonians have voted Gord their favourite news anchor several times over the years.

Gord says one of his most memorable career moments was when he reported live from the scene during the devastating Fort McMurray wildfires in 2016. Global Edmonton won 2 prestigious international Edward R. Murrow awards for its coverage.

In 2016, Gord was also recognized by his journalism colleagues with a RTDNA Canada Lifetime Achievement Award in 2016.

Most recently, Gord was honoured with the distinguished Sovereign’s Medal for Volunteers from the Governor General of Canada, which recognizes exceptional volunteer work in the community.

One of Gord’s proudest moments was when he was awarded a prestigious national military honour. He was appointed Honourary Lieutenant Colonel of 15 Edmonton Field Ambulance by the Federal Government. The unit is part of the 41st Canadian Brigade Group.

While Gord is best known as a veteran broadcast journalist, he’s also a best-selling Canadian author. He penned Mobsters and Rumrunners of Canada, which is sold at bookstores across Canada and the United States (Crossing The Line). It focuses on a little known part of Canadian history: the roaring 1920s and the connection between Canadian and American gangsters during prohibition.

Gord also devotes his time to help various local and national charities. He has been involved with the No Stone Left Alone Foundation since it started in 2011. No Stone is a national school program that educates students about our fallen soldiers who made the ultimate sacrifice.

Gord is often seen riding around Alberta taking part in motorcycle fundraisers for various rides including Kids With Cancer, 630 CHED Santa’s Anonymous Toy Run and Ride For Dad for Prostate Cancer. He is also proud to be on the board of directors with the Kids with Cancer Society.

When he’s not working, Gord is still a busy man. He’s an award winning singer/songwriter with three rock albums under his belt, and continues to perform around the Edmonton area.

Gord and his wife Deb also enjoy spending time with their rescue dog Daisy. Their vacation time is often spent on motorcycle adventures on their Harley Davidson Road King and enjoying the great outdoors.

WATCH: Gord answers a few questions for Global Edmonton viewers, including: how would people describe you, what do you do on your days off, and what is the best part of living in Edmonton?