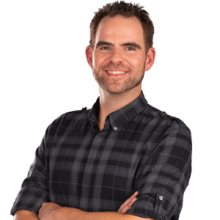 After years of being told “hey, you’ve got a good voice for radio”, and after realizing he has no other discernible talents or skills, Brett decided to pursue a career in broadcasting.

In hindsight, it was a sensible move, because he had a life-long love of radio. As a kid, he’d wait for his favourite song so he could record it on cassette. As a teenager, he’d listen to the radio while walking to work at Taco Bell. As a university student, he’d listen to the radio on the bus ride from Transcona to the University of Manitoba. And on, and on, and on.

In 2004, he graduated as a Broadcast major from the Creative Communications program at Red River College, and was immediately hired at 680 CJOB for the glamourous position of Overnight Weekend Operator.

It was that overnight shift, though, that provided the training ground that quickly allowed him to start dabbling in reading news. He spent the next couple of years as CJOB’s “swingman”, filling in for various news, sports, and shifts in the control room behind the board.

He then spent a few years as technical producer for Charles Adler and his national afternoon show, then a few years after that as afternoon news anchor, before being called up from the bullpen to fill in as an afternoon host.

In 2016 he was paired with Greg Mackling, aka the 680 CJOB “Talk Idol”, to host an afternoon show called “Mackling & Megarry”, and together they now host the 680 CJOB Morning Show.

He is also the co-host of a weekend entertainment show called The Couch Potatoes (with Jeff Braun), which is broadcast on affiliate stations in Edmonton, Calgary, Hamilton, London and Kamloops.

As mentioned, Brett grew up in the Winnipeg neighbourhood of Transcona, and is proud of his Transconian roots. He no longer lives there, but as they say “you can take the boy out of Transcona, but you can’t take the Transcona out of the boy.”

Brett likes to spend his spare time being bad at golf.​

Advertisement
Entertainment
April 26, 2019 11:13 am
Avengers Endgame: A look back, our Couch Potato review, and how not to be ‘that guy’ about spoilers

Avengers Endgame brings to a head 22 movies in the Marvel Cinematic Universe. Tickets in Winnipeg are sold out for the weekend. Continue reading →

A group of bystanders in downtown Winnipeg held a suspected attacker for police after a stabbing Friday night on Portage Avenue. Continue reading →

A missing person from Bow Valley, Alberta might be in Manitoba. Continue reading →

A Kleefeld man is dead after a crash on Highway 52 in Steinbach. Continue reading →

A Kleefeld man is dead after a crash in Steinbach. Continue reading →

Eight organizations in our city have been recognized by the Winnipeg Chamber of Commerce for their “spirit”. Continue reading →

CJOB’s Brett Megarry met with four young women who run their own bakeries to see what kind of challenges they face as women. Continue reading →

A 29-year-old man, who police say was high on meth, chased a family into a neighbouring suite and rummaged through their rooms. Continue reading →

During Saturday’s 48-28 Winnipeg Blue Bomber win over the Saskatchewan Roughriders, another victory was achieved. Continue reading →

A wayward moose caused a monster traffic disruption for those heading to the Banjo Bowl on Saturday. Continue reading →

The biggest offseason event in the Canadian Football League is coming to Winnipeg next year. Continue reading →

WINNIPEG – A man who allegedly got into a fight with a Winnipeg Police officer… has been captured, after over a week of being on the lam. This dates back to the morning of July 10th, when officers in the area of Redwood Avenue and Powers Street spotted a man known to police in a… Continue reading →

Bear trapped in a tree off St. Mary’s Rd

Winnipeg Police are on an interesting beat for Saturday afternoon. Around noon, they responded to a report of a bear up a tree, in the 400 block of Christie Road — which runs off of St. Mary’s Rd, south of the Perimeter. They arrived to find the bear 40 feet up the tree. “Winnipeg police… Continue reading →

Wuhan accounted for the bulk of China's 4,635 deaths from COVID-19, a number that has largely stayed static for mon… twitter.com/i/web/status/1…