The COVID-19 pandemic has forced a lot of people outside. Many have been relying on the relief of the outdoors as most indoor activities are banned. But people in Chestermere said city officials are making that hard to do.

On Jan. 13, the City of Chestermere announced all frozen storm ponds will be shut down because of safety reasons.

Officials said due to fluctuating water levels and the weak and unpredictable composition of the ice, no activity on storm pond ice is safe.

The city has applied sand or gravel on ice surfaces to discourage skating and said hockey nets and benches will also be tagged and removed from the ice surface.

Chris McMitchell’s backyard has one of the city’s storm ponds in it. He’s disappointed.

“We’ve been here 10 years and clearing this pond for our kids since they’ve grown up, and without incident. This ice gets very thick,” McMitchell said.

“I’m a little mad. I don’t see how this ice is hurting anyone. It’s 18 inches thick in December and January and not a lot of water flow. To say it’s dangerous…”

Members of the community said it gave them welcome relief considering other indoor restrictions due to COVID-19.

“It’s just the worst timing,” McMitchell said. “There’s decisions made and I think, ‘Why now?'”

“We still have a lot of winter yet. For them not to be able to play hockey — this is their escape and just one more thing taken away from us.”

“In the winter, storm ponds exhibit the same unpredictable behaviour as rivers, as the water levels and flow are in constant flux,” Chestermere Peace Officer Sergeant Bowman said.

“These changing flow patterns, coupled with run off from the roadway that includes salt (which melts ice), can create dangerous conditions that are not visible from the surface.

“Just because the ice looks solid does not mean that it is safe to use for walking or recreation.”

Shortly after 5 p.m. Friday, the city confirmed a child fell through the ice on a storm pond in south Chestermere that afternoon.

Witnesses said he was able to pull himself out and leave the scene.

“Chestermere Peace Officers (CPOs) received a call from a member of the public concerned that a child had fallen through the ice at the Kinniburgh Storm Pond. They advised that the child was able to self-extricate and left the scene,” the city said in a news release.

“CPOs attended the scene, located the hole in the ice and spoke with several witnesses. They have been unable to locate the child or the child’s family.

“Chestermere Fire Services was also dispatched to the area. The fire department found the evidence of the child falling through the snow-covered storm pond ice. Upon thorough search of the location and the water, they were able to determine that the child had been freed.

“In order to confirm the wellbeing of the child, CPOs ask that the child’s family reach out to them as soon as possible.”

Anyone else who has information relevant to this situation is asked to contact Chestermere Peace Officers at 403-207-7058.

The city is presently using education through social media, signage and on-site verbal warnings as a means to discourage the use of the storm ponds.

“We are in a time where there’s nowhere else to go,” Smith said.

“The lake by the landing is packed with people. With storm ponds closed, that place is going to be packed even more and not going to be COVID safe.”

Officials said: “The city must ensure the public safety of its citizens and make all attempts to prevent unnecessary deaths such as the tragic event that happened in December in Milton, Ontario, where a child fell through the ice on a storm pond and drowned.”

The Parks department said its crews have built many safe skating options for residents. 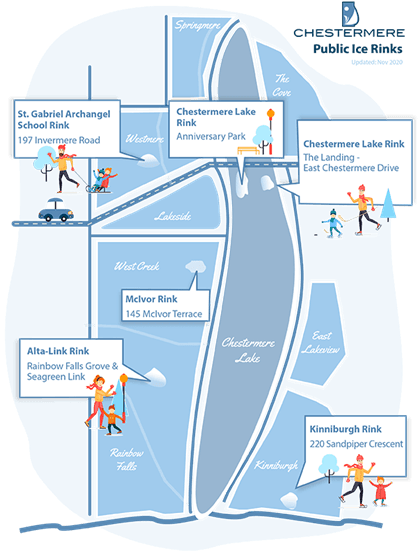